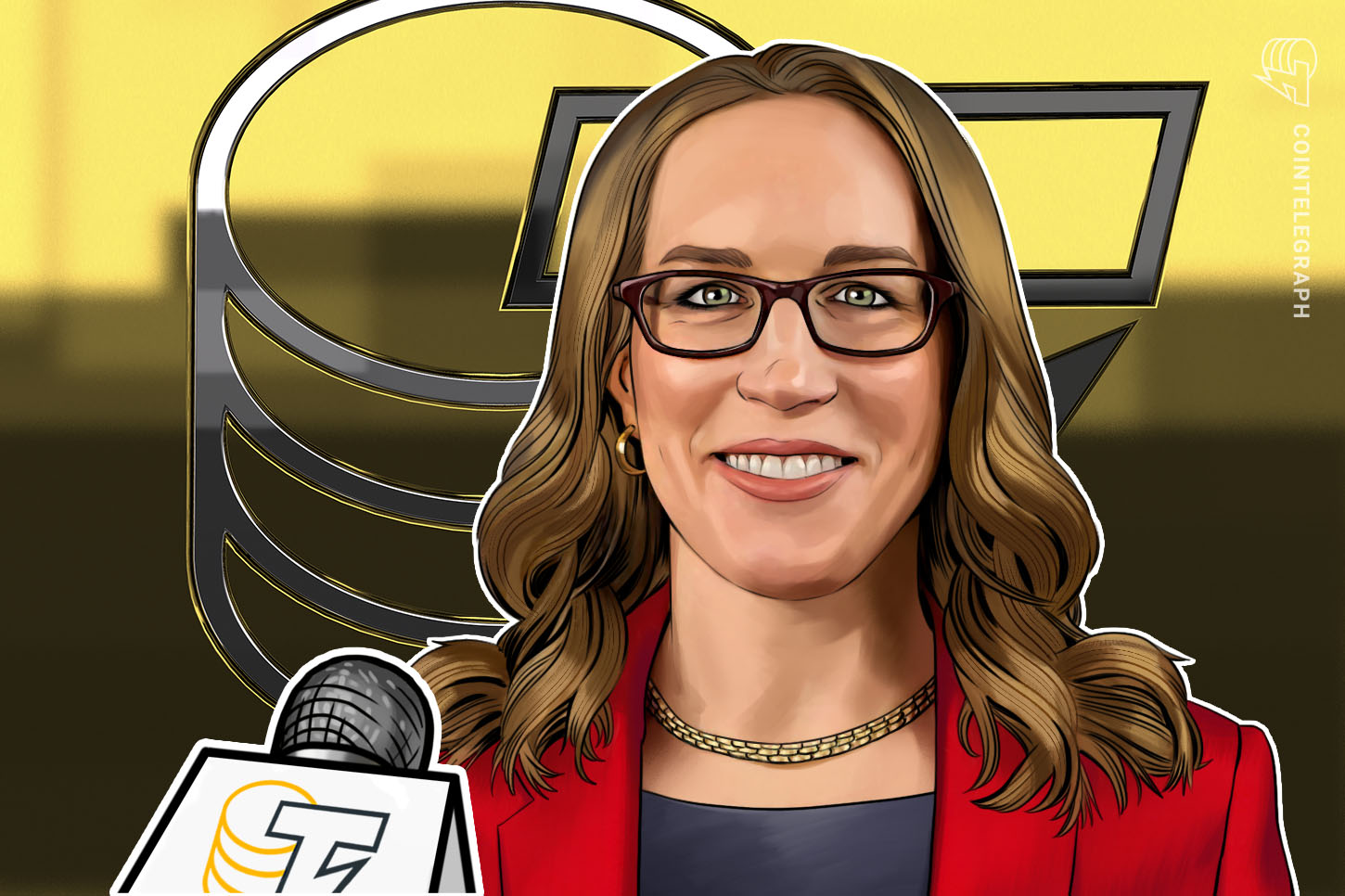 Most days, there is little love lost between the United States Securities and Exchange Commission and the world of crypto. As the regulator of the world’s largest capital market, the commission’s continuing work to track down sales for tokens it considers unregistered securities has left a fair bit of the crypto market viewing the commission like a boogeyman.

Which is not fair. There are controversial cases, but the ICO boom was rampant with predation, fraud and theft: Exactly the sort of issues you keep a regulator around to stamp out. Right now, though, the SEC is faced with a wide range of new concerns as technology enables new relationships between investors and markets, including crypto. A legitimate concern is their years-long hesitance to issue reliable guidance for well-meaning actors.

Consequently, Hester Peirce being sworn in for five more years today is big news for crypto. Since her initial term started in 2018, Commissioner Peirce’s focus on token fundraises and blockchain technologies has earned her the moniker “CryptoMom.” Cointelegraph got to speak with Peirce on future plans as well as recent news from the SEC, and especially the controversy surrounding the legal battle with Telegram.

Commissioner Peirce was cagey about identifying pressing issues for the new term and, indeed, casually sidestepped a question about her priority list saying “I think it will be dictated by the chairman.”

The seat Peirce occupies was vacant from 2015 until her January 2018 appointment, meaning her term was abridged. She noted that she has a better roster of working relationships going into the new term, will be last until 2025.

“I hope that some of the relationships that I’ve developed in the first couple of years will continue to deepen and people can help me think through these hard issues,” Peirce said. She further invited outside input on new policy from people who aren’t normally in charge of policy:

“I really believe that as regulators, we need to be drawing on the wisdom of people outside of the regulatory community. And that’s, again, part of what I really like about this area, which is that people are coming and looking at our securities laws from a totally fresh and new perspective. And they make me think about things in ways that maybe I wouldn’t have thought about just based on talking only to securities lawyers.”

SEC safe harbor and the vision for token sales

Peirce’s interest in hearing from crypto folks about new ways of handling securities laws is nothing new. Famously, she has been working on a safe harbor for token offerings in the process of going from centralized initial coin offerings to decentralized networks. In a previous conversation with Cointelegraph around the time she presented the safe harbor proposal, Peirce’s main drive seemed to be for industry response.

Concerns regarding token sales remain a huge part of the conversation between crypto and the SEC. Right now, there is no clear pathway to do a sale for a token that will ultimately not be treated as a security while tokens that register as securities find nowhere to trade in the U.S. For her part, Peirce remains sympathetic to those concerns:

The working arrangement that many of the biggest token sales, including Block.one’s EOS, Telegram’s GRAM, had used was the Simple Agreement for Future Tokens, or SAFT:

“The SAFT framework was designed to allow accredited investors to fund the development of the network and then once that network is developed and you’re ready to launch and you’re ready for the token to get into the hands of lots of people so they can use it, then we’re talking about a different thing. Not a securities offering, in my mind, and so I think there was something to that framework.”

Like the industry, Peirce is not optimistic about that framework’s future: “I think we’ve made it really hard for people to do legally compliant token offerings in the U.S.”

The most famous example of a failed SAFT was Telegram’s $1.7 billion capital raise for GRAM tokens, which were supposed to be the native cryptocurrency for the Telegram Open Network. After ordering an initial halt on the token distribution in October, the SEC won that case in June, successfully scuttling the network.

While the SEC’s pursuit of Telegram was ongoing, Peirce was hesitant to comment. Her safe harbor proposal, however, would provide protection for firms in similar positions, and many saw the proposal as a response to the Telegram case. Weeks after the court ruled in favor of the SEC, Peirce broke ranks to voice opposition to the SEC’s role in shutting down the entire network.

Speaking to Cointelegraph, Peirce continued to be frustrated with misaligned priorities:

“What was the end goal of what we’re trying to do? You know, it’s one thing to say you’re enforcing the securities laws, but when the end result is that the people — people who wanted to take advantage of this, who knew of the work that had been done in building that network — are not able to do so because we came in and we said, ‘sorry, the way that you’re distributing the tokens doesn’t work under our securities laws,’ I don’t understand who that was helping.”

A shifting scene of international markets

One curious issue with Telegram, and similar ICOs like Block.one’s for EOS, is that they challenge typical jurisdictions. Peirce noted of Telegram:

“We were applying our law because there were some U.S. purchasers and there was some U.S. involvement, but a lot of the activity was outside the United States and so that made me even more concerned because then you’re using U.S. securities laws to stop a project that is partly happening in the U.S. but partly happening elsewhere.”

Cryptocurrencies and digital securities are simply extreme examples of a broader international trend: Markets are bumping into each other in ways they just didn’t used to.

The SEC dates back to the 1930s, hence why the use of technology to lure investors in across state borders is still called “wire fraud,” as the literal telegram was the primary means. Peirce acknowledged that this meant a lot of changes for the SEC, but maintained the importance of the commission in keeping the U.S. market running:

“The history of our world has been that It’s gotten easier and easier to interact with people and markets all over the world. Technology is certainly making that possible, and so if you come to the U.S. and you’re dealing with a U.S.-registered entity, you get U.S.-registered-entity-type protections.”

Despite her sympathies in the Telegram case, Peirce denied Telegram owner Pavel Durov’s denunciation of the SEC’s work as economic imperialism:

“I don’t think that that’s an accurate description of what the SEC is trying to do. […] This is a unique time in the securities laws, because we’re confronting this unique kind of framework and we’re trying to figure out how it applies. I came to one conclusion. My colleagues came to another.”

In another recent case, investment app Abra was offering synthetic assets to non-U.S. residents, while the app itself has a large base of developers in the country. The SEC and Commodity Futures Trading Commission jointly fined Abra. Unlike the Telegram case, the Abra fine did not shut the app down. It did, however, raise some interesting questions about jurisdictions. According to Peirce, that’s part of an ongoing debate: “It’s helpful if we can be as clear as possible about when our laws apply and when they don’t, it’s just that the world is a messy place.”

Another major subject before the SEC is economic recovery amid the current pandemic. Describing the SEC’s role in the area, Peirce said:

“We can help with companies getting back on their feet, getting the funds they need to get up and running again. And so that’s something that I’m looking forward to working on.”

Regarding efforts like loosened restriction on crowdfunding, the commissioner saw those as more likely to inform future actions than to continue indefinitely, given the process for long-term rulemaking.

One long-term takeaway from COVID-19 and the resultant shift towards more services and payments online is that it has moved the goalpost on how much this can be an expectation:

“Some people would say, ‘well, there’s a huge percentage of the population that doesn’t have access to the Internet and doesn’t have access to computers. You can’t make it really hard for them to get the paper that they need.’ And I think what we can say now is, yes, there is a part of the population that is very paper-dependent still. But we’ve seen during COVID that people have transitioned lots of aspects of their lives to the virtual framework, to digital, and so I think people are more comfortable and I think they’ll be less resistant to making that much more common.”

While these are unprecedented times, a lot of the challenges before the SEC have not suddenly emerged. It’s mostly been an accelerant for existing trends that promise to shake up the way that investors trade securities all over the world.

How low can the Bitcoin price go?
Bitcoin capitulation 4th-worst ever as BTC hodlers lose $10B in a week
Uzbekistan issues first crypto licenses to two local ‘crypto stores’
Bitcoin, Ethereum Technical Analysis: BTC Moves Above $17,000 on Wednesday
Bitcoin will ‘teleport’ to $14K or worse if BTC breaks $16K — Analyst