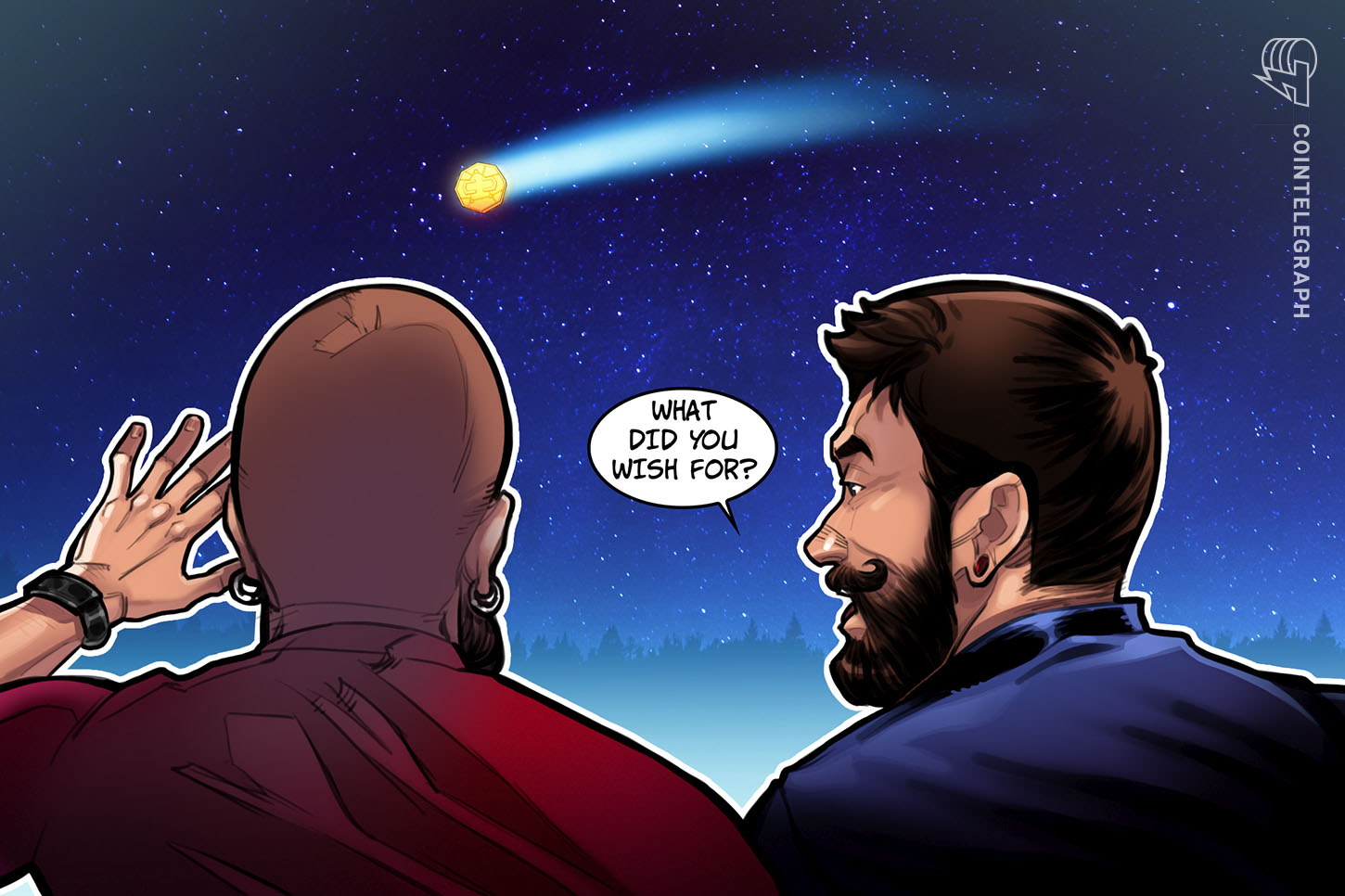 There are some decentralized finance projects that make flash loans; Yam Finance (YAM) was a DeFi project that made a flash appearance.

YAM, which initially described itself as a “minimally viable monetary experiment,” launched on August 11 amid some fanfare, and in less than two days, its market value soared from zero to $57 million. But on late Wednesday, the company announced that it found a bug in its rebasing contract and by Thursday, its market capitalization crashed back to zero. To no avail, the DeFi community rallied to save the project, whose rebase function turned it into a kind of global competition, with investors gambling on the token price.

YAM’s short life has also highlighted a divide in the crypto community, with some concerned about the somewhat reckless direction that DeFi appears to be taking. Whether this divergence is generational, a matter of Bitcoinist versus DeFi “degenerates,” or something else entirely isn’t really clear, but an informal Cointelegraph survey uncovered two radically different views of YAM’s rebasing experiment.

Erik Voorhees, CEO of ShapeShift, said on August 11, “YAM looks like a scam. […] Projects like this are not going to be good for DeFi.” Meanwhile, Messari CEO Ryan Selkis slammed YAM Finance as a “perfect P&D [pump and dump] setup” with a 20% chance of becoming DeFi’s version of The DAO, Ethereum’s 2016 near-death experience.

Taylor Monahan, founder and CEO of blockchain interaction interface provider MyCrypto, told Cointelegraph, “YAM marks a turning point where things go from a bit wild to downright scary.” She mentioned that “everyone knows there is a lot of value at stake” in DeFi projects — more than $6 billion this week — “but no one imagined an openly unaudited project with absurd branding would capture $500 million in less than a day.”

The bug that was discovered in the YAM protocol code resulted in excessive YAM reserves being minted, making it “impossible to take any future governance actions.” The project then called on the DeFi community for help, whose support was forthcoming, as BitMEX CEO Arthur Hayes tweeted: “I did my part to save YAM, did you do yours?” CoinGecko also aided the project, and its founder and CEO Bobby Ong described YAM to Cointelegraph as “a very successful crypto economic experiment — albeit a risky and careless one.”

YAM proved that one can bootstrap a successful project community on top of other communities “by leveraging on the various DeFi communities such as Chainlink, Synthetix, Aave, Maker and others,” Ong explained to Cointelegraph:

“It is a very interesting experiment as it also implemented a rebase function made popular by Ampleforth in its protocol rules. Tokens with rebase functions essentially turn it [the project] into a massive multiplayer crypto game with players all over the world betting on the token price. It creates an asset class that is not correlated with the price of Bitcoin, Ether, or any other tokens as its price is driven purely by its own protocol rules.”

Others, while sympathetic to the Yam enterprise, weren’t willing to go quite so far as describing it as an experiment — at least not in the scientific sense. Ruaridh O’Donnell, the co-founder and director of information systems at Kava, a DeFi lending platform, told Cointelegraph, “Calling it an experiment implies that it was a carefully set up system designed to prove out a new concept. It was not that. It was a quickly put together mash up of existing DeFi ideas.” He then added, “However, sometimes that is what we need to inspire the real versions that come along later.”

O’Donnell counseled taking the longer view. “New markets always have periods of over-hyping. They often follow an S-curve model where growth is slow at first before becoming over-hyped as people speculate on the potentials of the new technology, before evening out as people learn more,” he said.

It may be difficult to maintain one’s equilibrium when a market is growing as fast as the DeFi market. When asked if DeFi was bubbling over, John Wagster, an attorney at Frost Brown Todd LLC, told Cointelegraph: “The rapid increase in the total amount of value locked in DeFi, from roughly $1 billion in May to over $6 billion today, could certainly be viewed as a sign that the market is overheating.” However, he also said that “the truly innovative concept of yield farming is the result of clever engineering that seems to have lured market participants looking for a new opportunity.”

Lex Sokolin, chief marketing officer and global fintech co-head at ConsenSys, told Cointelegraph: “Software scales ideas like never before, where a single developer can architect and deploy a fantastic DeFi application to $500 million in assets overnight […] When compared with the existing financial systems within banking and fintech, this space moves much faster and with more momentum.” He further shared:

“My takeaway from YAM is that there is massive demand for financial infrastructure innovation, and that the demand can outpace the capacity of the existing operating environment.”

Monahan, on the other hand, is worried that “things that were dangerous yesterday — naive and reckless teams with good intentions — will quickly be replaced by all scams and money grabs and criminals. We are already seeing phishing sites and extensions exclusively targeting DeFi products — e.g., Uniswap. We are seeing Google ads and malicious DMs and tweets to fake sites.” She further shared:

“I said in February that the total value locked (TVL) for DeFi was clearly the early stages of going parabolic and it will happen faster than we foresee. COVID-19 put a damper on things but ultimately there is nothing — not even a global pandemic — that can stop the momentum of the crypto markets.”

Asked if DeFi was already boiling over, Tone Vays, Bitcoin analyst and organizer of The Financial Summit, told Cointelegraph: “Unfortunately due to the recent rise in Bitcoin, it does not look like DeFi is overheating yet, and that is why everyone is rushing to get rich from these scams while they can.” Vays went on to add:

“The developers don’t even really need a functioning product. The YAM founders probably wanted it to last more than two days, but considering there was a market on day one and it was valued at a $60 million market cap, the founder could have sold $5 million worth of YAM on day one and now can relax and enjoy the rest of life.”

Asked whether he considered YAM a scam, Vays answered, “To me, anyone that prints their money is running a scam. It was different when Satoshi [Nakamoto] did it because he was the first to solve an actual problem.” In contrast, CoinGecko’s Ong said: “I would not consider it a scam as the rules were clearly defined upfront for everyone to see. I do however consider YAM to be very risky and a careless experiment.”

The point about risk revolves around the rebase function, which can mint huge amounts of YAM tokens, thereby diluting existing token holders, but this may not have been known to all participants. The project is being called careless because its code was not properly audited and tested before launch.

There really isn’t much precedent for these sorts of weekly detonations. As Sokolin told Cointelegraph, “Incumbent systems have been built much more like complex cathedrals. […] The crypto space will not feature-match 50 years of core banking and portfolio management software overnight.”

Ong added that he sees the current rush mimicking the mining craze of 2014–2016. Back then, however, one had to understand the mechanics of mining, but now, “one just has to have capital to stake and farm the early tokens, making this a more democratic process.”

There is a danger of moving too fast and breaking too much when it relates to people’s financial assets, added Sokolin, “If we want to get to mass retail adoption, the standards will end up being more stringent and the assets more regulated.” Ong also added: “Eventually, this ‘test in production’ behavior will result in a massive loss, and it won’t surprise me if a Mt. Gox-like catastrophe was to happen at some point.”

Has anything been gained from last week’s events? Wagster told Cointelegraph: “The fact that YAM apparently went live with unaudited software code is a huge red flag to anyone paying attention, but one bad apple should not spoil the whole bunch.” Ong added that in the future, those staking a large amount in DeFi should consider buying insurance. In this instance, “insurance for the YAM contract was available on Nexus Mutual but there was no buyer for this contract,” he said.

O’Donnell emphasized the outsized impact of coding errors in this high-stakes environment: “I think it highlights that building these systems is hard and quite unlike other software development. Mistakes can lead to catastrophic failures unlike anything a standard webapp is capable of.”

Vays was doubtful that any insights at all were gathered from the recent events: “The only thing useful that came from YAM is to show that these projects can lose you all your money in two days — but I already see people waiting for YAM 2.0 so the lesson was not learned.” Indeed, as Cointelegraph reported, total value locked in YAM has surpassed $400m since the collapse of the network, according to a report from crypto analytics firm Messari.

Others, however, believe the project’s quick demise may find a place in crypto’s annals. “YAM is now a cautionary tale,” Kara Miley, global public relations lead at ConsenSys, told Cointelegraph. “An audit could have prevented the initial issue — rebasing, as it was missing a basic mathematical function to get the right numbers — and a proper test suite would have caught this,” she added.

Still, Sokolin wouldn’t be surprised to see more implosions of this sort, given that DeFi is about committing financial assets on a potentially perpetual, decentralized network: “I would expect multiple periodic collapses within the DeFi space, but hope that their magnitude and impact — think the DAO, then the ICO collapse — will be less and less existential, and increasingly informative.” Meanwhile, Wagster said investors should remain ever vigilant:

“Expect highs and lows as the DeFi market matures — investors should approach the market with their eyes wide open. New investors in particular should avoid trying to cash in on a fad that is not yet well understood.”

As the dust from Yam Finance settles, many look out and see a bright horizon for DeFi yet. “The crypto community is sitting on one of the most fundamental innovations in the history of financial services,” Sokolin told Cointelegraph, “The key takeaway for me is to play the long game, rather than focus on asset prices in the short term.”