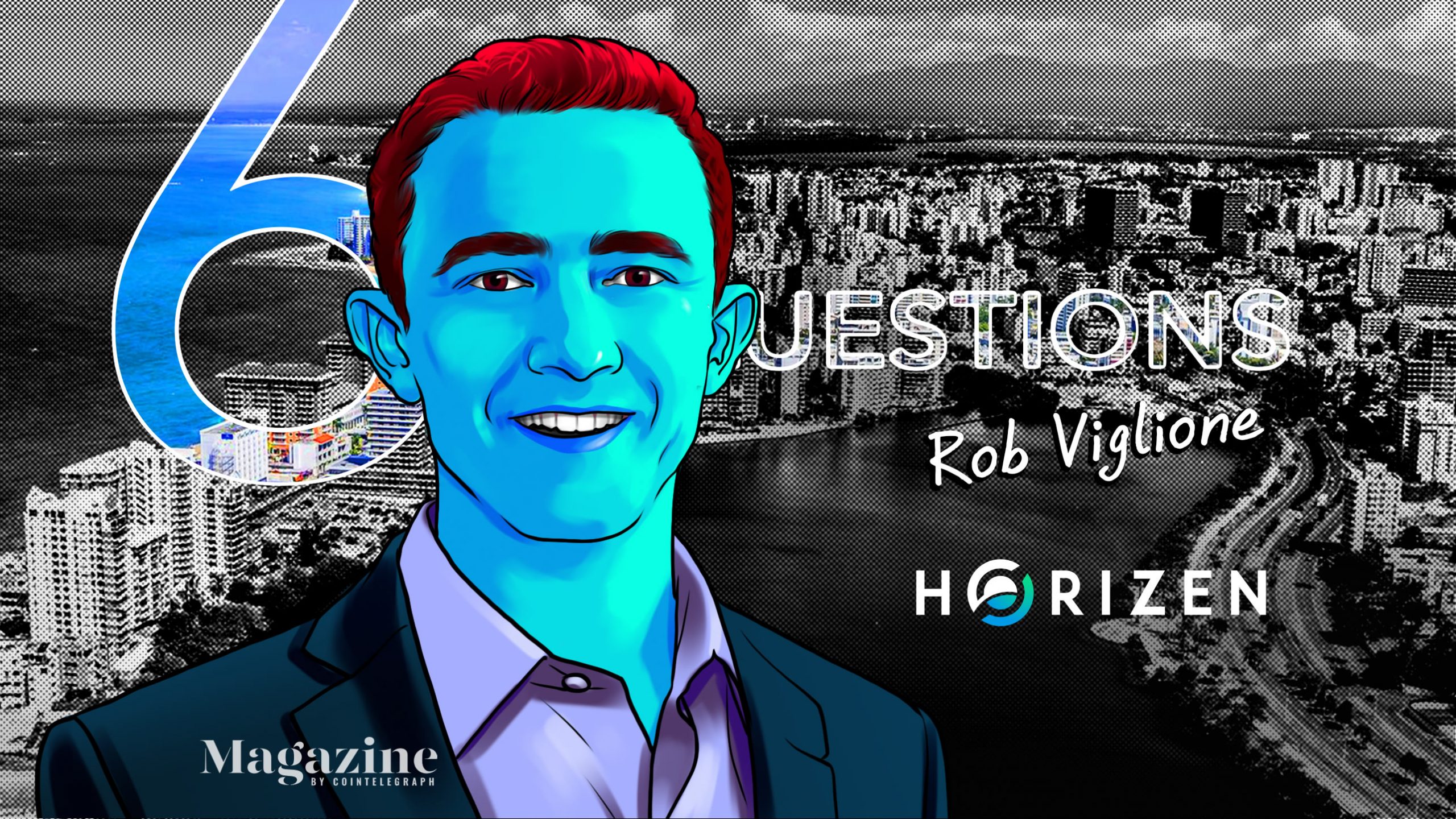 Each week we ask the buidlers in the blockchain and cryptocurrency sector for their thoughts on the industry… and we throw in a few random zingers to keep them on their toes!

This week our 6 Questions go to Rob Viglione, co-founder of Horizen.

Rob is the team lead at Horizen, a blockchain platform that aims to enable an application-rich and inclusive ecosystem through leading-edge sidechain solutions. He’s also the CEO and co-founder of Horizen Labs, a company that builds blockchain solutions for businesses.

Formally a trained physicist, mathematician, and military officer, his experience working on satellite radar, space launch vehicles, and combat support intelligence informed much of his understanding of how blockchain technology could change the trajectory of global societies.

Rob holds a Bachelor of Physics and Actuarial Mathematics, an MBA in Finance & Marketing, and a Ph.D. (C) in finance at the University of South Carolina, where he researches cryptocurrency and teaches a class on blockchain in finance.

1 — What’s a problem you think blockchain has a chance to solve, but hasn’t been attempted yet?

The biggest opportunity for the technology is in reshaping social organization and governance.

What Bitcoin did in creating a competitive market for money can be turned towards competition for governance services, specifically to give people a real voice in their communities and to use incentives to induce socially beneficial behavior.

There are some companies experimenting in this direction, like Colu, that use the underlying technology to help cities engage their citizens by rewarding them for taking certain actions aligned with strategic goals, like promoting sustainability and local commerce. This is just a start, and the real promise is combining this kind of micro engagement with provably fair voting systems, community tokens, and quite simply, an explosion in experimentation.

2 — Which movie alternate universe would you most like to live in, and why?

I haven’t started watching the series yet, but I love the idea in Altered Carbon where consciousness can be transferred to different bodies. I’m still waiting for that Singularity moment where who we are can be decoupled from our physical bodies, but paradoxically that would surely change who we are!

3 — What is the single most innovative use-case for blockchain you’ve ever seen? It may not be the one likeliest to succeed!

Being part of Horizen, I can’t help but be a bit of a zero knowledge cryptography geek and get excited about the core possibilities of blockchain in being universal truth engines.

Take what we’re doing with Zendoo, Horizen’s sidechain, as an example. On the surface it appears to be simply a blockchain interoperability protocol, but as we layer in SNARK proving systems for security, it opens the door to any kind of computation or application residing as a “sidechain” to Horizen and the mainnet ends up validating whatever rules happen to be in that “sidechain.” I use quotations because what resides on the other end of the system, what’s passing a SNARK certificate for verification, need not be a blockchain!

This opens the door to a world of new use cases in which what we’re doing today in the world of public blockchain simply creates that tamper resistant global truth system that can connect the world.

4 — What’s a favorite movie, and choose the single most memorable moment from watching it.

I have to go with “Gladiator” as being one of those super inspirational movies that never gets old. Who doesn’t love a story of a humble badass who refuses the easy path of corruption, loses everything, and still refuses to give up? Our team and community joke around about Horizen being like the honey badger, just going about its business and refusing to give up, but maybe we should be comparing ourselves to Maximus!

The crypto industry has had exuberant highs, gut wrenching lows, and everything in between with plenty of opportunities to take the easy path for quick success. We’ve always chosen the harder path, not because we’re masochistic, but because we’re playing the long game.

5 — What are the top five Crypto Twitter feeds you can’t do without, and why?

Narrowing this down to five is tough, but ranging from interesting to informative (not arranged in that order!) I’ll take a stab by saying:

It’s hard for me to think of anything as being out of reach, but my brain’s plasticity would probably argue that my goal of being fluent in a few more languages might not happen! I’m excited to see how that works out!