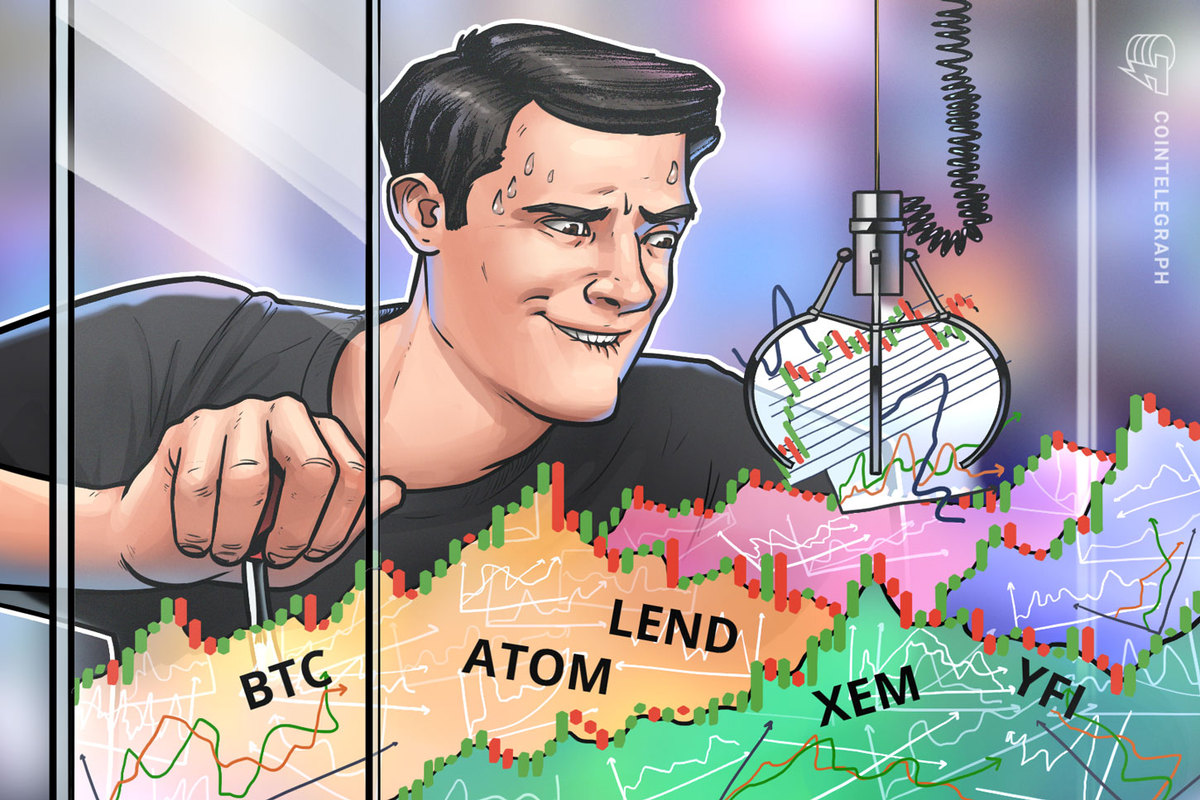 Ripple Labs CEO Brad Garlinghouse believes that the U.S. Federal Reserve’s recent decision to allow inflation to stay above its 2% target objective could debase the dollar further. According to Garlinghouse, this decision is likely to lead “to further diversification of assets which will certainly be good for crypto.”

The various stimulus and fiscal measures announced around the world to counter the coronavirus pandemic led economic slowdown are bullish for Bitcoin (BTC). However, Bitcoin’s major bull market cycles show that each successive cycle has been longer than the previous one.

Hence, if history were to repeat itself, Bitcoin could consolidate for another 3-12 months before making a decisive move.

During this period, when Bitcoin remains range-bound, several other altcoins are likely to rally in rotation.

For the past few months, the market action has been in the DeFi tokens, which have been in a bull run of their own.

So, while Bitcoin consolidates, let’s look at some of the altcoins that could provide an opportunity in the short-term.

The average directional index (ADX), a component of the directional movement indicator, has dipped below 24 and the 20-day exponential moving average ($11,534) has flattened out, which suggests that the trend in Bitcoin has weakened considerably. 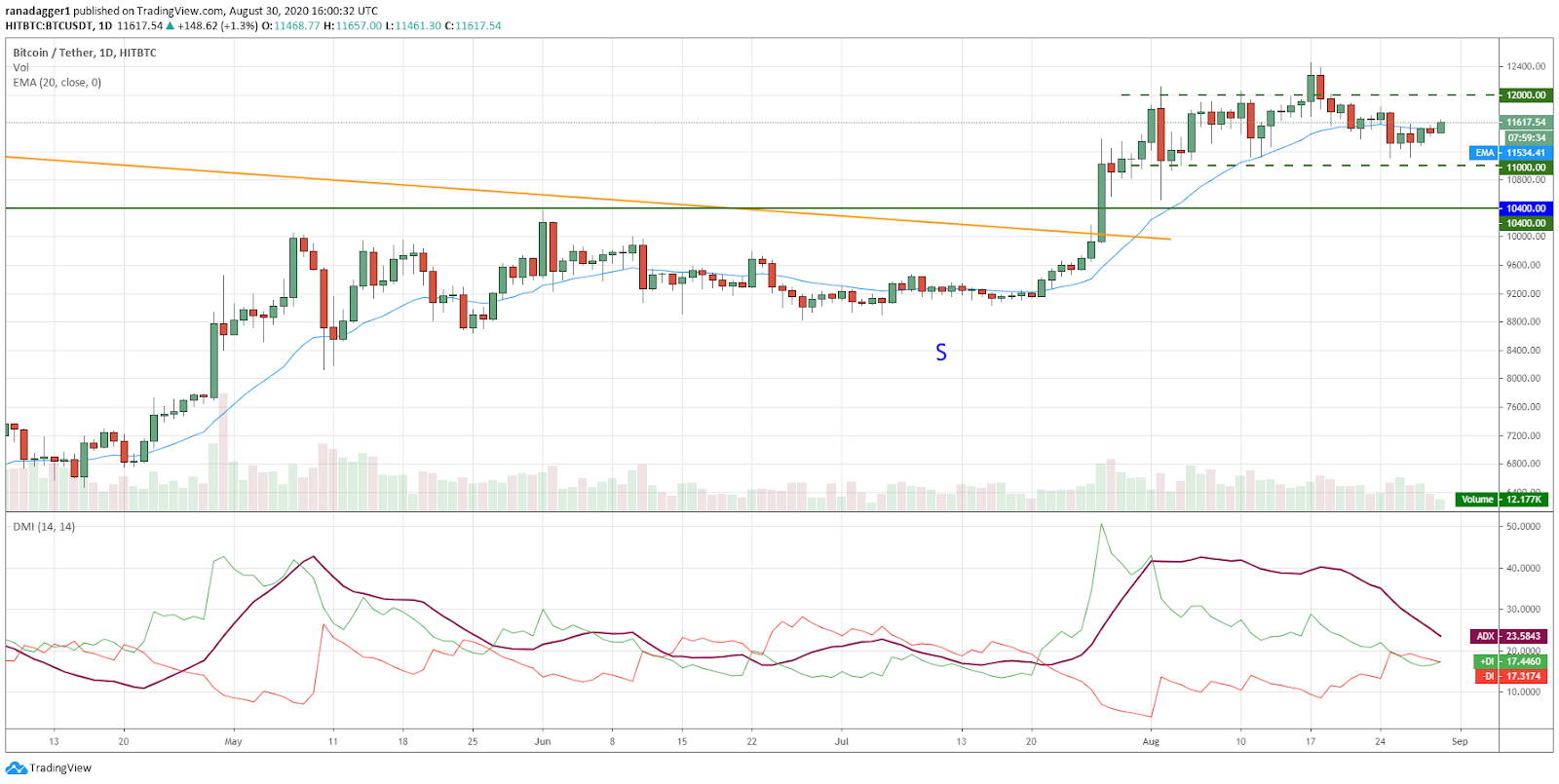 However, if the price turns down from the overhead resistance zone, the BTC/USD pair is likely to spend some more time inside the range. 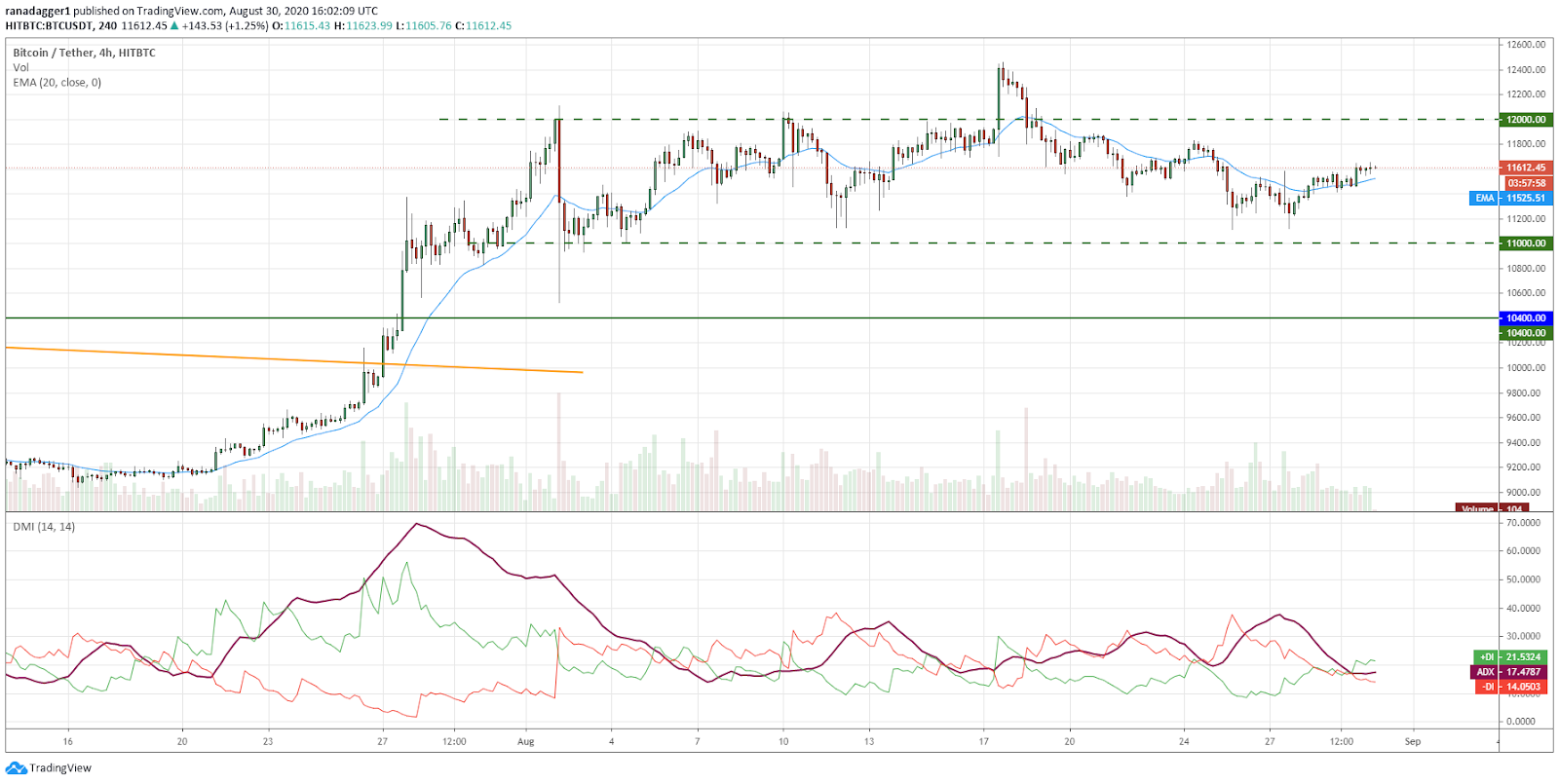 The -DI and the +DI are closer to each other and the ADX is below 18, which suggests a balance between supply and demand.

Unless the pair picks up momentum, the possibility of a breakout in the short-term looks weak, hence, the range-bound action is likely to extend for a few more days.

The bears aggressively defended the $8.50 level on Cosmos (ATOM), which attracted profit booking by the short-term traders that dragged the price down to the breakout level of $7.249. 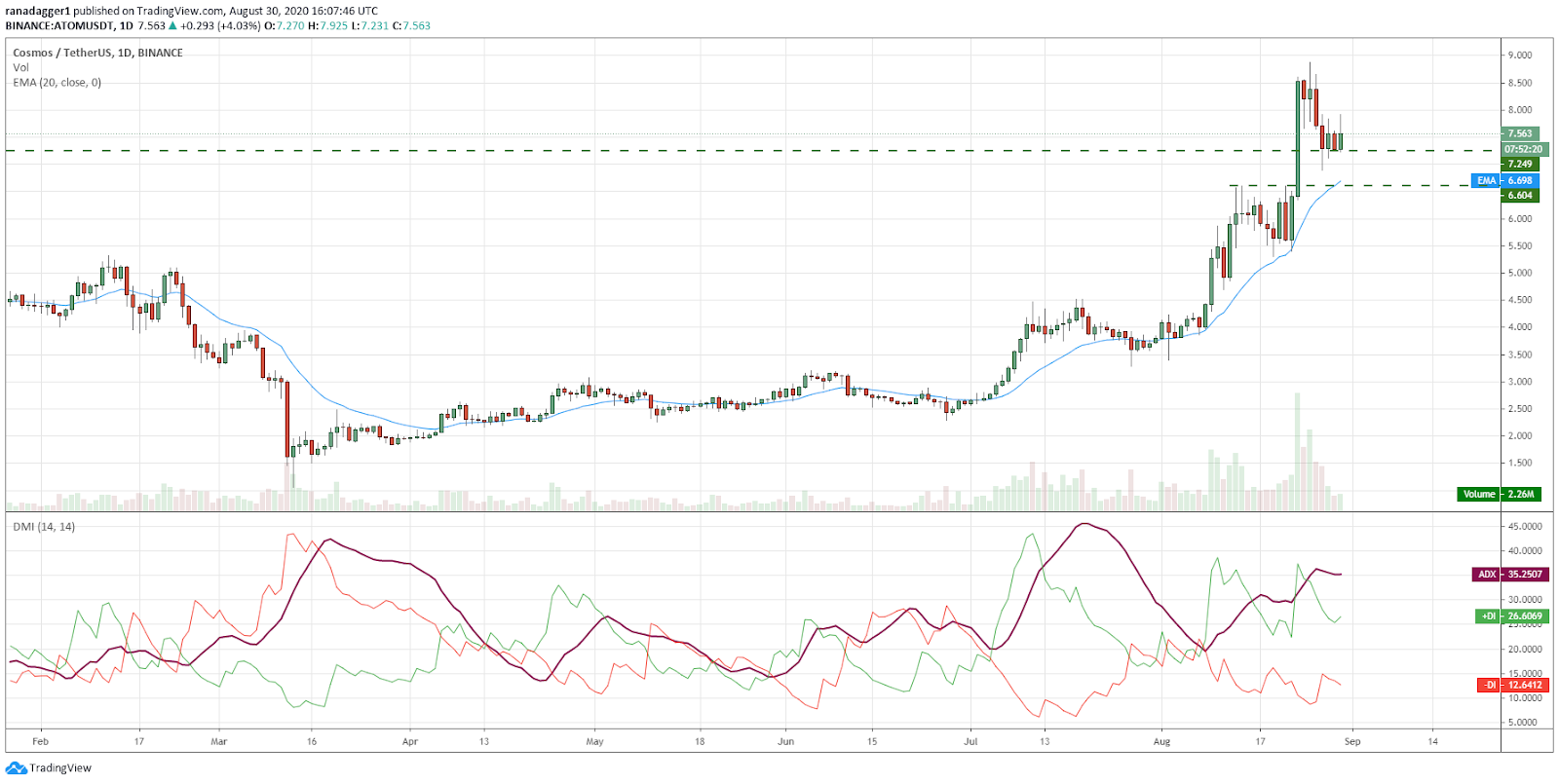 If the ATOM/USD pair rebounds off the breakout level, then it is likely to act as a strong floor during further declines.

The ADX remains strong above 35 and the +DI is above the -DI, which suggests that the bulls have the upper hand. On a break above $8, a retest of the recent highs at $8.877 is likely.

If the bulls can push the price above this level, the uptrend could resume with the next target objective at $10.471. 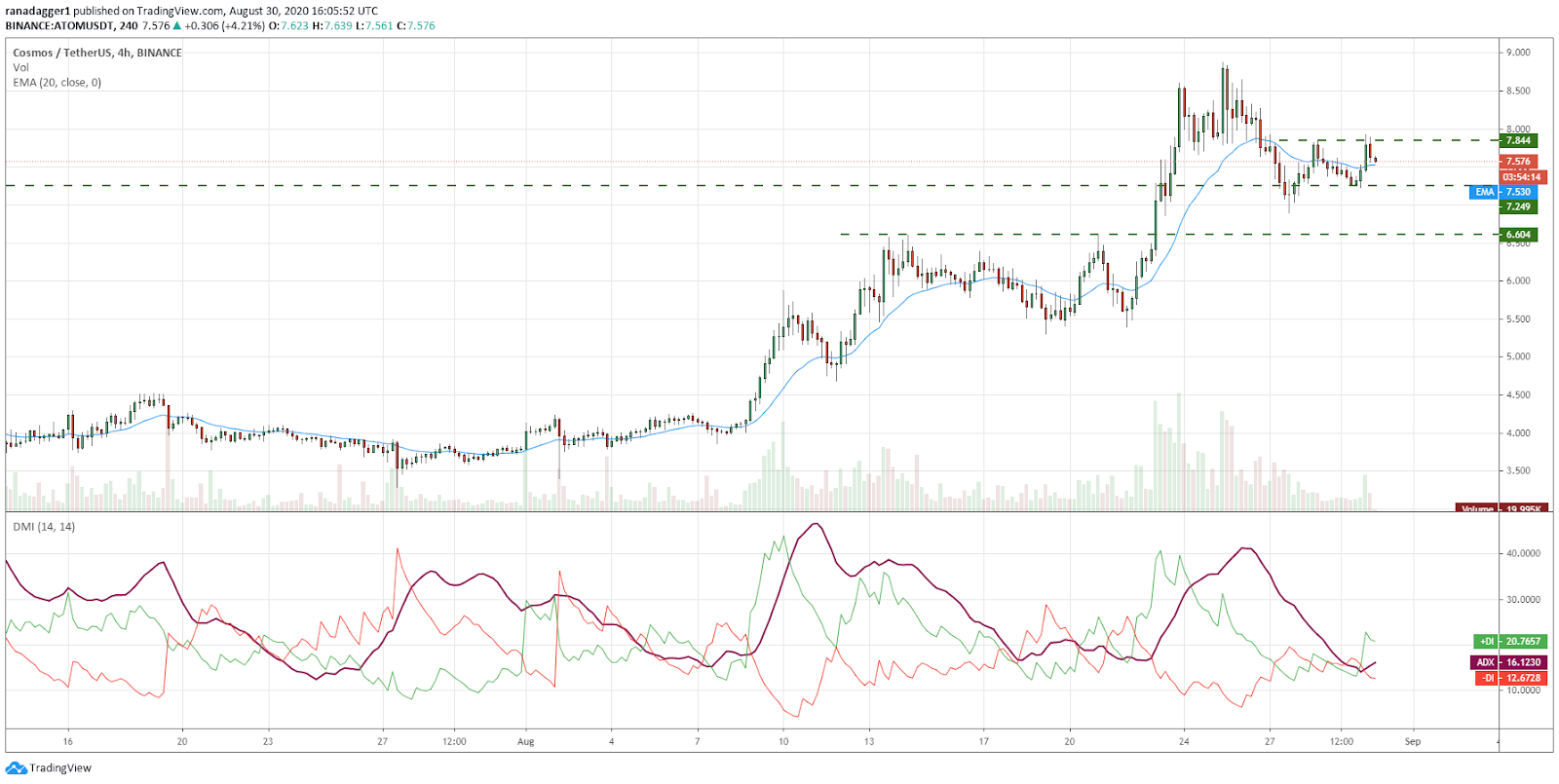 Although the bears pulled the pair below $7.249, they could not sustain the price below it, which shows that the bulls are buying at lower levels.

If the bulls can push the price above the $7.844 resistance, a retest of $8.877 is possible. Above this level, the uptrend is likely to resume.

This bullish view will be invalidated if the pair turns down and sustains below $7.249. Such a move will suggest that the correction could deepen to $6.604 and then to $5.50.

The ADX is trading above 55 and the +DI is above the -DI, which suggests that Aave (LEND) is in a strong uptrend, with the bulls firmly in command. 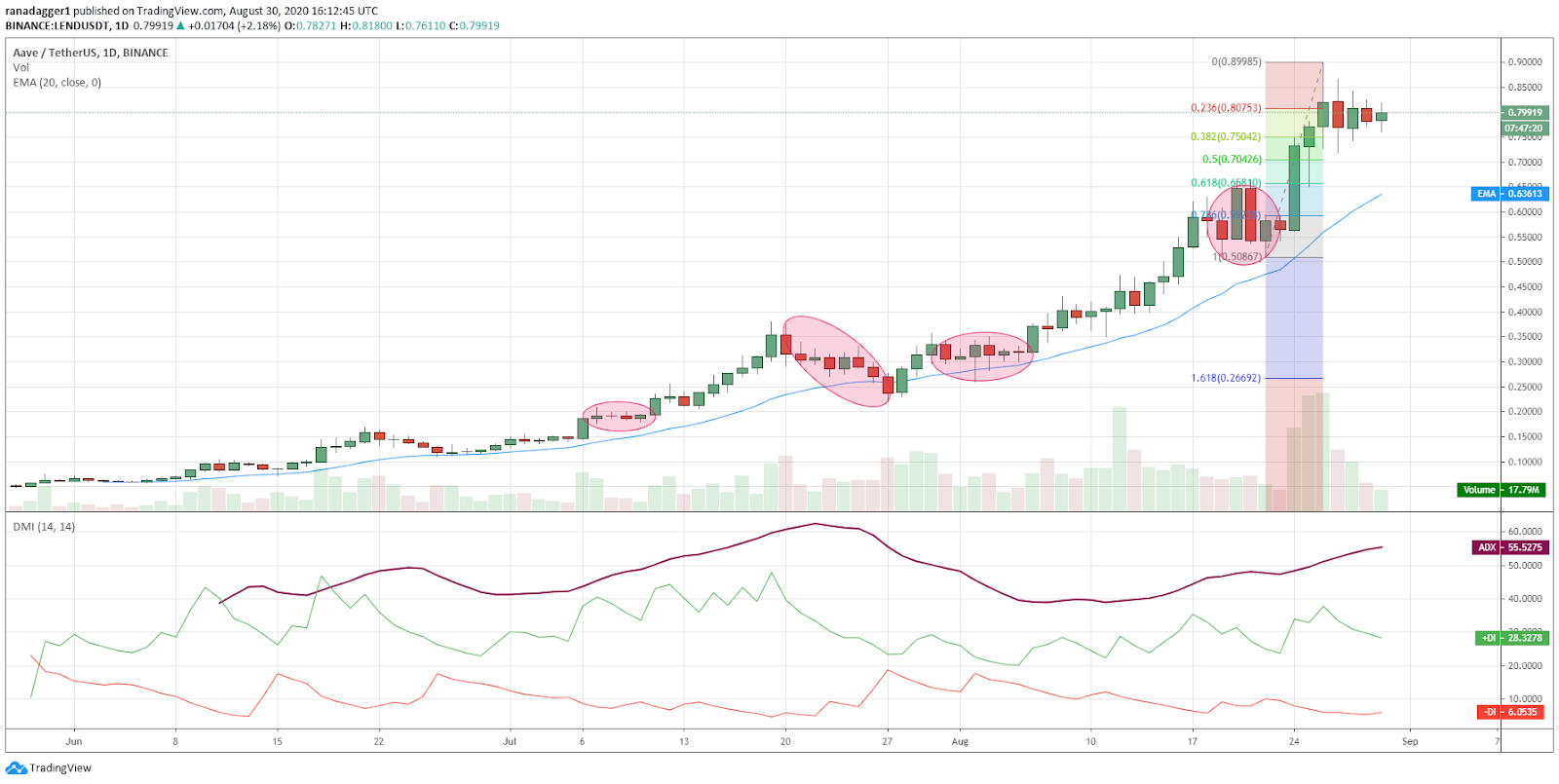 Currently, the LEND/USD pair has pulled back after reaching a high of $0.89985 on Aug. 26. However, the positive thing is that the bulls have not allowed the price to dip below $0.70426, which is the 50% Fibonacci retracement level of the most recent leg of the rally.

History suggests that since July, the pair has not spent a long time in consolidation (marked via ellipses on the chart). Hence, the bulls are likely to again make an attempt to resume the uptrend by pushing the price above $0.89985. 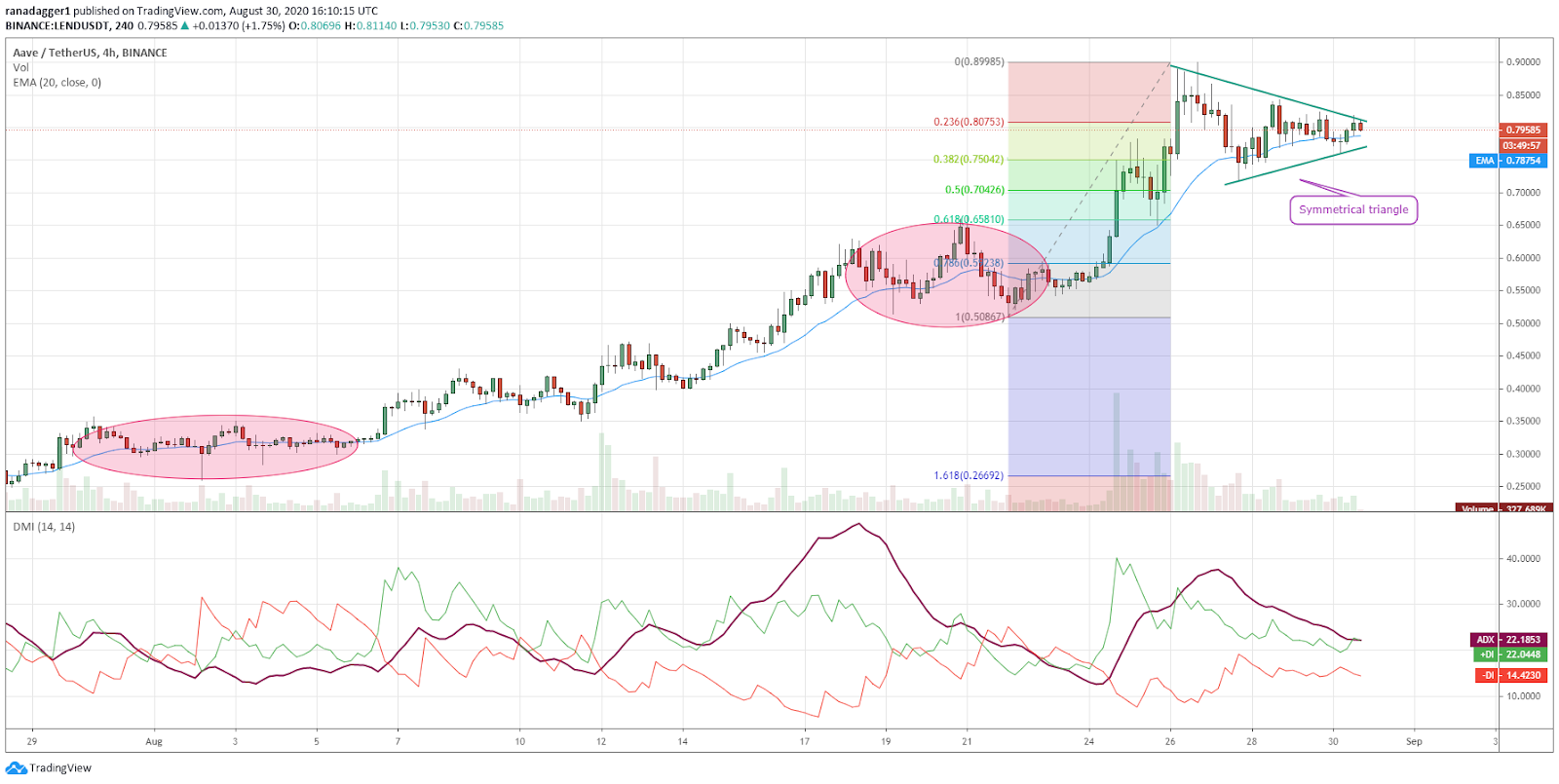 The 4-hour chart shows that ADX has dipped below 23 and the 20-EMA is flattish, which suggests a balance between supply and demand. The pair has formed a symmetrical triangle, which usually acts as a continuation pattern.

If the bulls can push the price above the triangle, a retest of $0.89985 is likely. A breakout of this resistance is likely to resume the uptrend.

Contrary to this assumption, if the bears sink the price below the triangle, a drop to $0.65 is possible. If this support also cracks, it will suggest that the pair has topped out at $0.89985.

NEM (XEM) broke out of the $0.1295715 overhead resistance on Aug. 29, which is a huge bullish sign. However, the sharp up move of the past few days has led to profit booking by the short-term traders today. 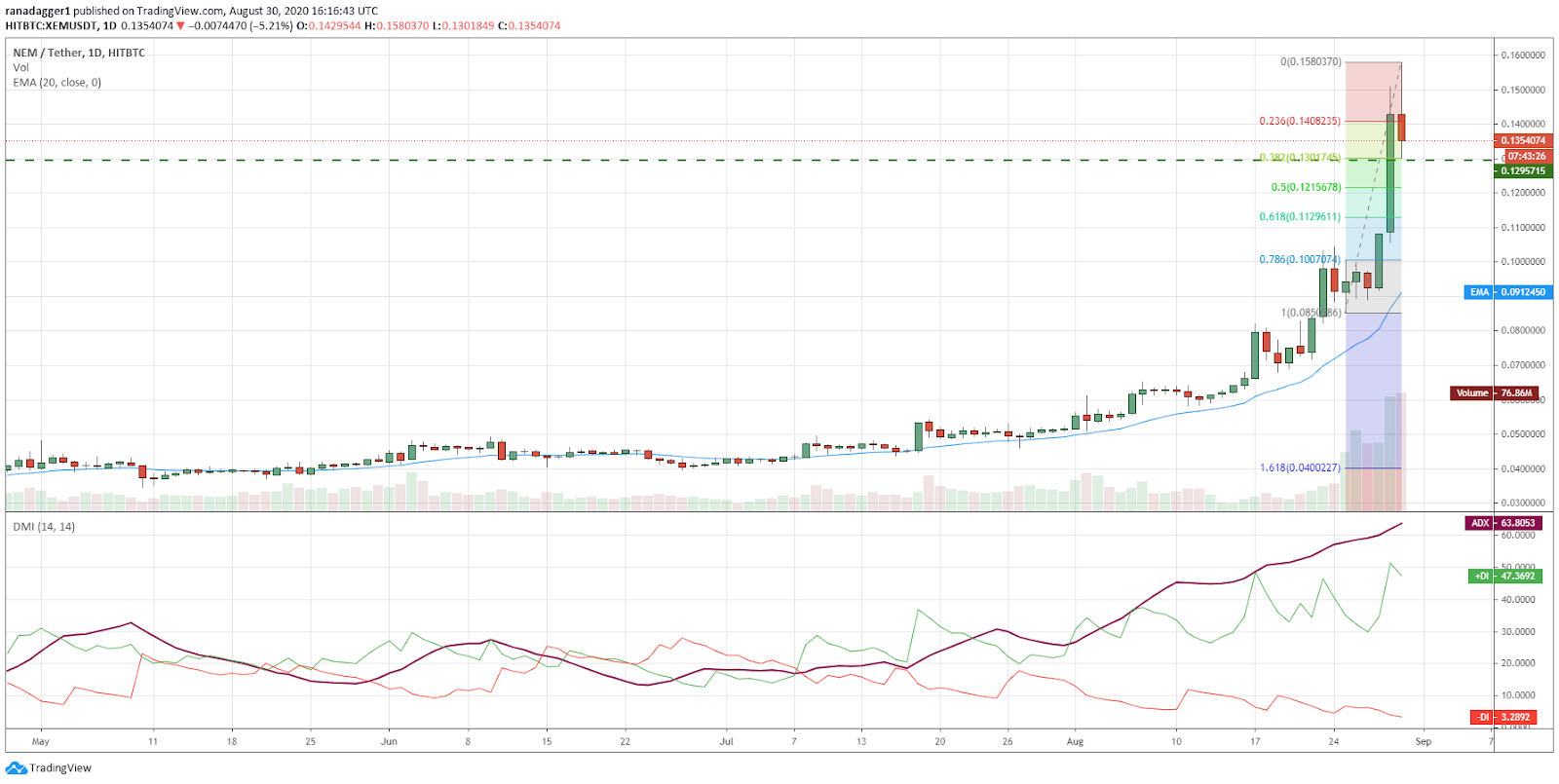 The bulls are likely to defend the $0.1215678–$0.1129611 support zone, which are the 50% and 61.8% Fibonacci retracement levels of the most recent leg of the rally. If the XEM/USD pair rebounds off this zone, the bulls will again attempt to resume the uptrend.

Conversely, if the bears sink the price below $0.1129611, a drop to the 20-day EMA ($0.091) is possible. A bounce off this level will be a positive sign as it will suggest that the bulls are buying on dips to this support.

The bullish view will be invalidated if the bears sink and sustain the price below the 20-day EMA. Such a move will suggest that the current breakout was a fake one. 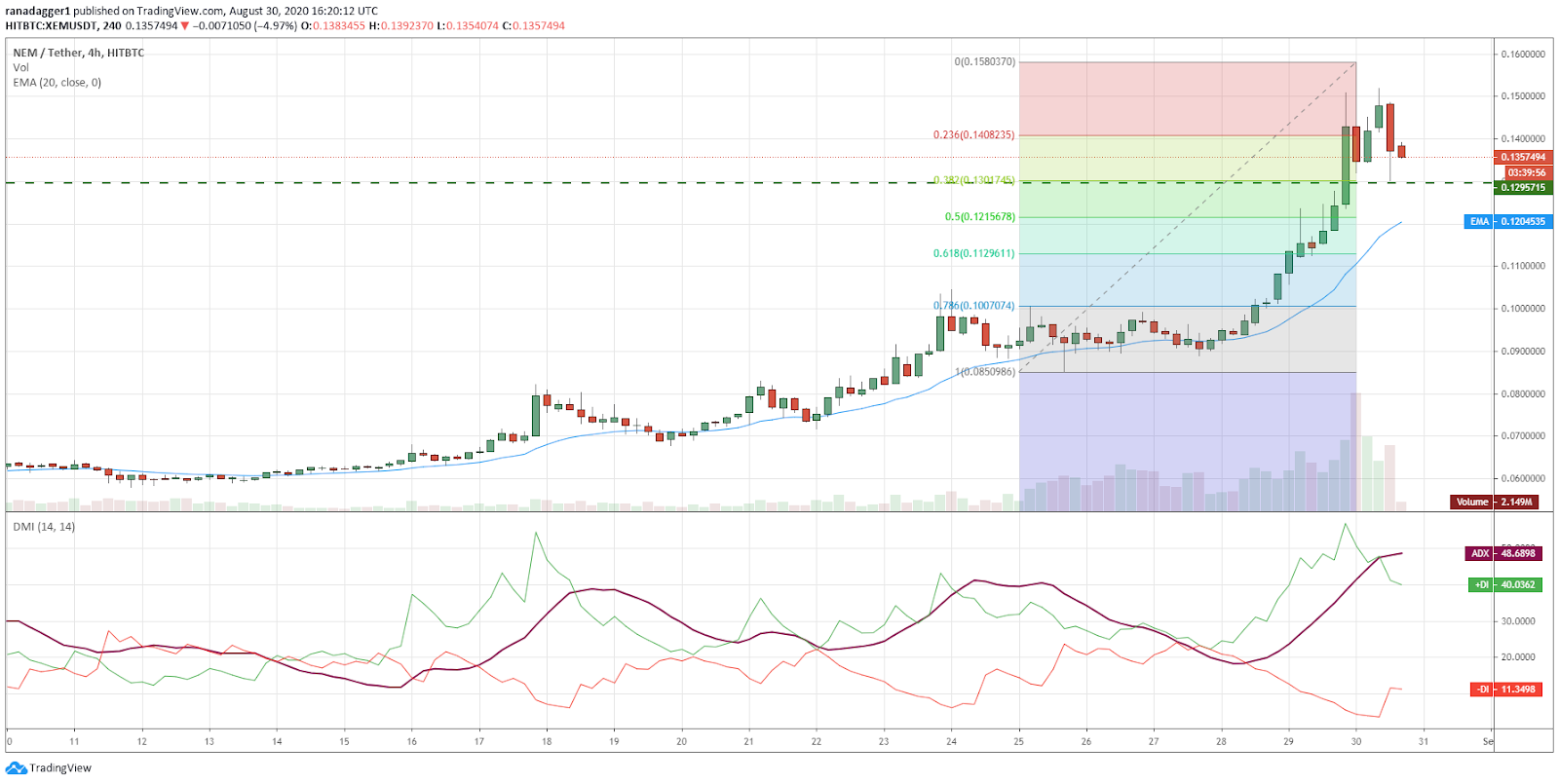 The ADX on the 4-hour chart is above 48 and the +DI is above the -DI, which suggests that the advantage is with the bulls.

Currently, profit booking has dragged the price to the breakout level of $0.1295715. If the pair rebounds off this level, it will be a huge positive as it will suggest that the bulls have defended the breakout level, which will increase the possibility that the uptrend will resume.

However, if this level cracks, the next support is at the 20-EMA. If the pair bounces off this support, the bulls will again attempt to resume the uptrend. 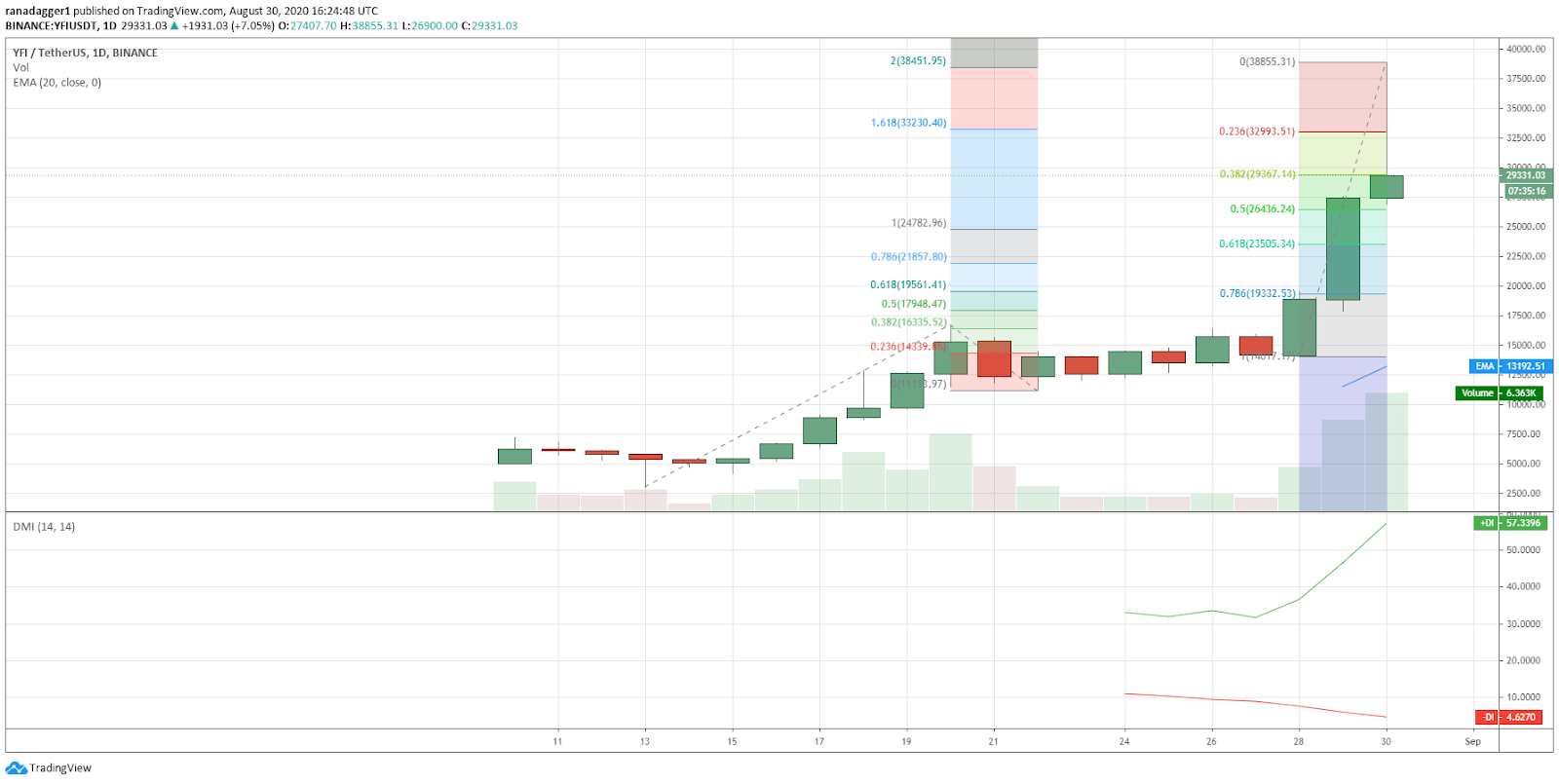 Today, the YFI/USD pair witnessed profit booking close to the 200% Fibonacci extension level of $38,451.95 and has given back the intraday gains.

If the price closes near the lows of the day, it will form a bearish shooting star candlestick pattern. Usually, if this pattern is followed by a large bearish candlestick on the next day, it could indicate that a short-term top is in place. 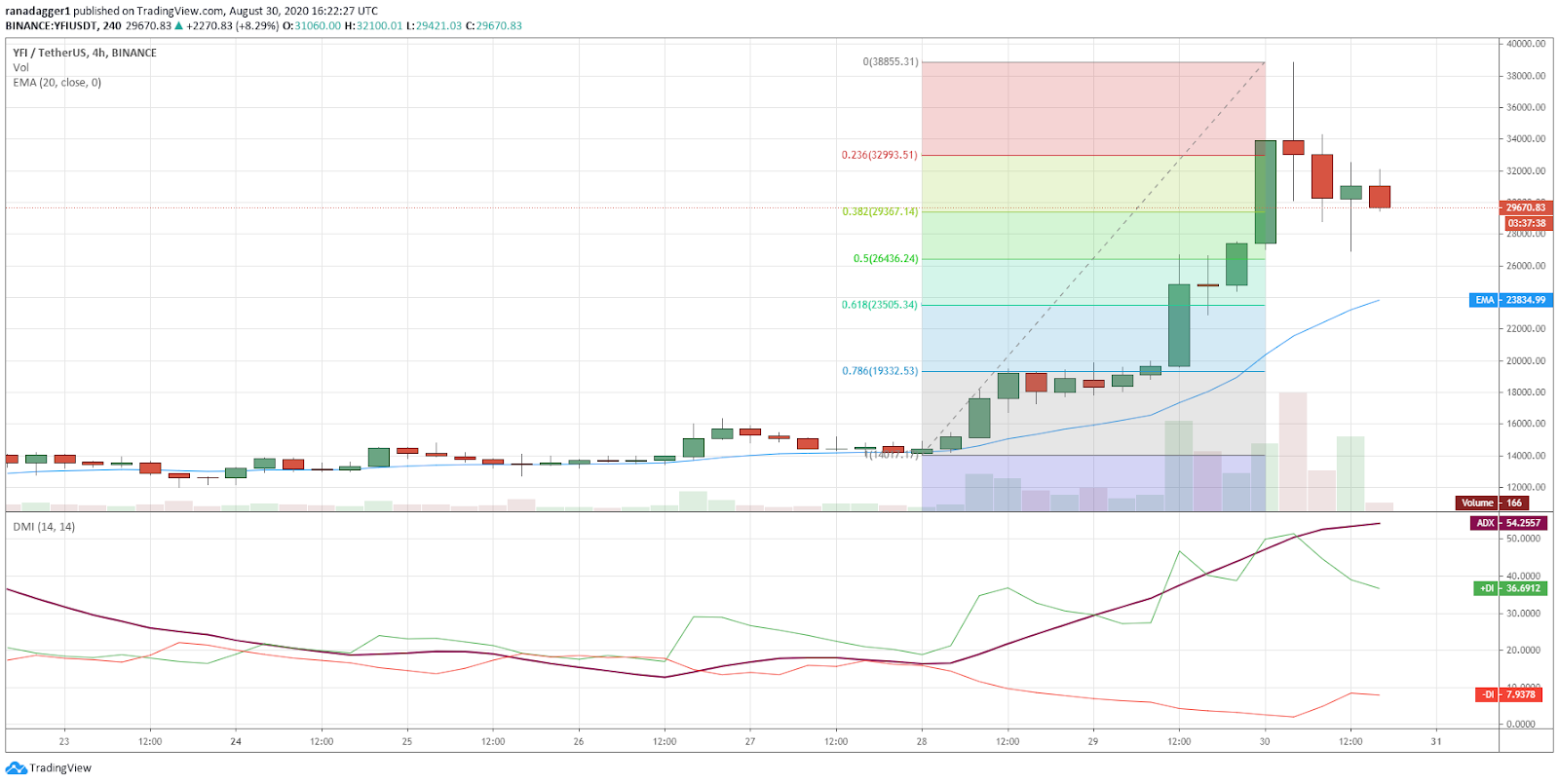 The ADX is above 54 and the +DI is above the -DI, which suggests that the trend remains strong and in favor of the bulls.

The views and opinions expressed here are solely those of the author and do not necessarily reflect the views of Cointelegraph. Every investment and trading move involves risk, you should conduct your own research when making a decision.

Crypto community weighs in on SBF’s ‘apology tour’
New Cardano algorithmic stablecoin evokes old fears for the community
MATIC attack: How smart crypto traders “got out” before a 35% price drop
Elon Musk – Why $120,000 Bitcoin next week | I’m investing in Ethereum | Conference with ARK Invest
Vitalik Buterin on the crypto blues: Focus on the tech, not the price