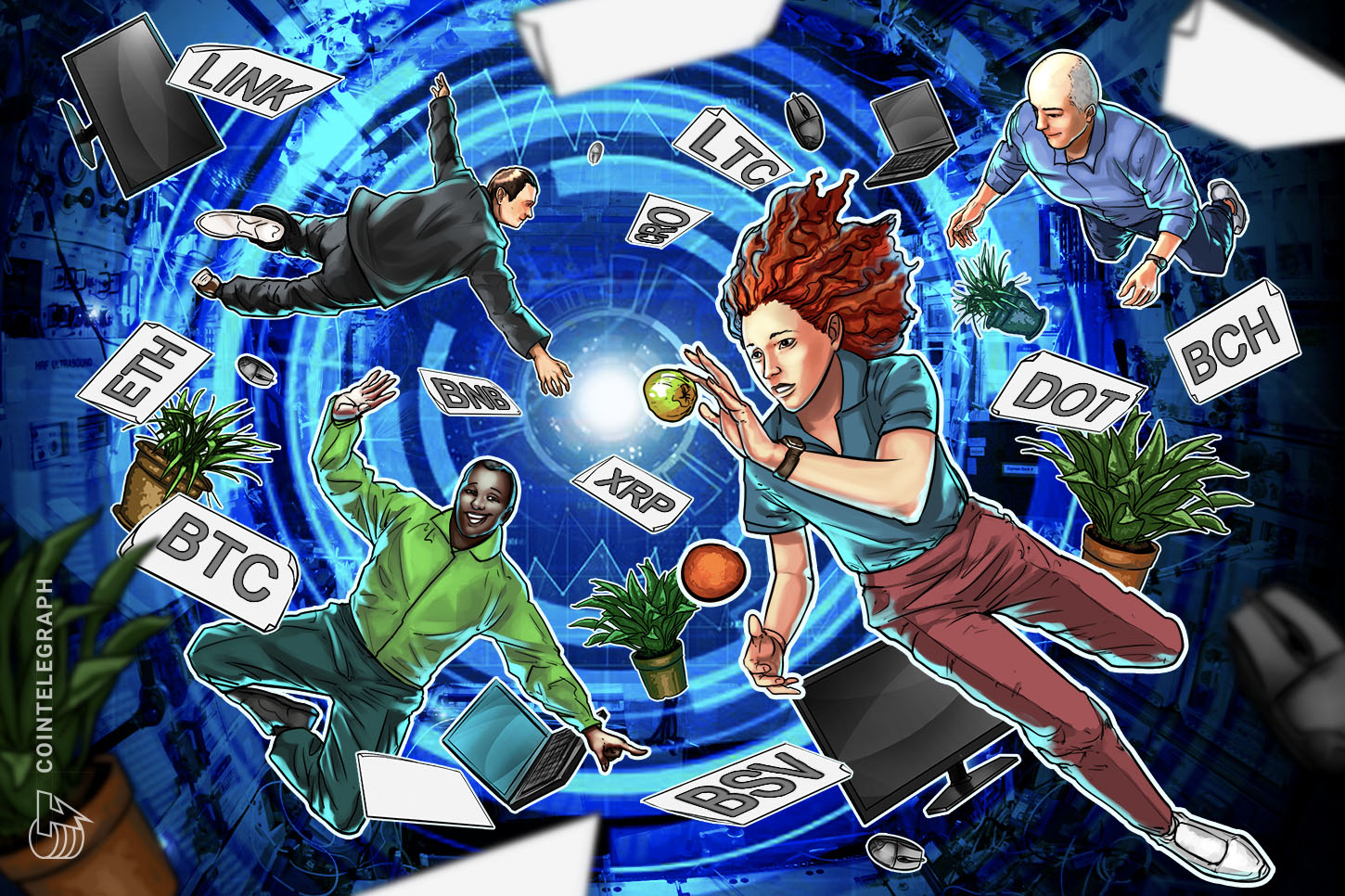 This week MicroStrategy, a Nasdaq-listed company, announced that it had added 16,796 Bitcoin (BTC) to its existing holding of 21,454 Bitcoin. This means in less than a year the firm has amassed 38,250 Bitcoin. This is a defining moment as MicroStrategy becomes the first public company to adopt a Bitcoin standard.

Other large companies may follow in MicroStrategy’s footsteps but they are likely to purchase at much higher levels according to Datavetaren, a pseudonymous software engineer.

CNBC Mad Money host Jim Cramer also suggested that he might place 1% of his portfolio into Bitcoin as he considers gold ‘dangerous’. During a podcast with Anthony Pompliano, Cramer said that storing gold was dangerous, hence, his desire for Bitcoin.

In other news, Rich Dad Poor Dad author Robert Kiyosaki said that Bitcoin ranks among the top three long-term investments that everyone should have in their portfolio. Kiyosaki believes that investors will dump these safe haven assets when a coronavirus vaccine is developed but according to him, that could be a great buying opportunity.

Generally, Bitcoin continues to have a bullish outlook in the long-term but what can traders expect in the short-term? Let’s analyze the charts to find out.

Bitcoin broke above the 20-day exponential moving average ($10,759) on Sep. 15 and is now attempting to sustain above the $11,000 resistance. This is encouraging as the further the price moves away from the recent lows at $9,835 the harder it will be for the bears to resume the correction.

The next two levels where the bears might try to stall the recovery is at the 50-day simple moving average ($11,269) and above it at the downtrend line.

Even if the BTC/USD pair turns down from either of these overhead resistances, the bears will have to slice through several support levels to reach $9,835, which is likely to be a difficult task.

The relative strength index has broken out of its downtrend line and has crossed over into positive territory, which suggests that the momentum is with the bulls. If the bulls can push the price above $11,700, a rally to $12,460 is likely.

Ether (ETH) dipped below the $366 support today but rebounded from $354.381. This shows that the bulls are accumulating at lower levels. They will now try to push the price above the moving averages.

If they succeed, the ETH/USD pair could rally to the 61.8% Fibonacci retracement level of $419.473. This level could act as a stiff resistance but if the bulls can push the price above it, a retest of the $480–$488.134 resistance is likely.

This bullish view will be invalidated if the pair turns down from the moving averages and breaks below $353.43. Such a move is likely to attract further selling that could drag the price down to the critical support at $308.392.

XRP has again bounced off the $0.235688 support today, which confirms that the bulls are defending this level aggressively. However, repeated retests of a support level tend to weaken it.

The 20-day EMA ($0.252) is sloping down and the RSI is in the negative territory, which suggests that the bears have the upper hand.

The first sign of strength will be a breakout and close (UTC time) above the 20-day EMA and a break above the downtrend line will signal the resumption of the up-move.

The DOT/USD pair is currently trading inside a rising wedge pattern. A breakdown and close (UTC time) below the wedge could result in a fall to $4 and then to $3.5321. If the pair bounces off this support, then a few days of range-bound action is possible.

Contrary to this assumption, if the pair rises from the current levels and breaks above the wedge, the uptrend is likely to resume. The first target on the upside is $6.50 and above it $6.8619.

Bitcoin Cash (BCH) broke above the $235.05 resistance on Sep.15, but the bulls could not clear the 20-day EMA ($240) hurdle, which suggests that the bears are selling on pullbacks to this level.

However, the bears have not been able to break the $215 support for the past few days, which shows that selling is drying up at lower levels.

The BCH/USD pair is at the $235.05 resistance and the bulls will once again attempt to push the price above it. If they succeed in driving the price above the 20-day EMA, it will increase the likelihood of a rally to $260 and then to $280.

Failure to rise and sustain above $235.05 will keep the pair range-bound for a few more days.

Binance Coin (BNB) formed a doji candlestick pattern on Sep. 14, which showed indecision among the bulls and the bears. The failure to sustain the price above the $32 resistance attracted profit booking by short-term traders and dragged the price down to $26.7123.

However, even after the sharp fall on Sep. 15, both moving averages are sloping up and the RSI is in the positive territory, which suggests that the advantage is still with the bulls.

The bulls purchased the dip to $25.82 today, which shows demand at lower levels. They will now once again attempt to push the price above the $32–$34 resistance. If they succeed, a retest of the all-time highs at $39.5941 is likely.

If the BNB/USD pair fails to rise above the $32–$34 zone, a few days of range-bound action is possible. The advantage will shift in favor of the bears if the pair dips below $25.

Chainlink (LINK) broke below the uptrend line on Sep. 15 and the bears will now try to sink the price to the next support at $8.908. A break below this support could result in a fall to $7 and then to $5.

The downsloping 20-day EMA ($12.66) and the RSI in negative territory suggests that the bears have the upper hand.

However, if the bulls can quickly push the price back above the uptrend line, it will suggest that they are accumulating at lower levels.

The first sign of strength will be a breakout and close (UTC time) above $13.28 and the uptrend is likely to resume after the LINK/USD pair rises above the downtrend line.

Crypto.com Coin (CRO) has risen above both moving averages, but the bears are unlikely to throw in the towel easily. They will try to stall the up-move at the downtrend line.

If the CRO/USD pair turns down from the downtrend line and breaks below the moving averages, a retest of $0.144743 is possible. A breakdown of this support will signal the likelihood of a deeper fall to $0.11.

The 20-day EMA ($51) is sloping down and the RSI is in the negative territory, which suggests that bears have the upper hand. If the $45.1626 support fails to hold, the decline can extend to the critical support at $39.

Contrary to this assumption, if the LTC/USD pair rebounds off the current levels and rises above the $51–$53 resistance zone, it will signal that the correction has possibly ended. The first target objective on the upside is $64 and then $68.9008.

Bitcoin SV (BSV) has roughly been trading between the $160–$170 range for the past few days, which suggests indecision among the traders.

If the bears sink and sustain the price below $160, the BSV/USD pair could drop to the critical support at $146.20. The bears have not been able to break this support since March, hence, the bulls are likely to defend this level once again.

However, if the selling pressure picks up and the pair slips below the $146.20–$135 support, it will signal the start of a new downtrend that has a target objective of $100 and then $77.

This bearish view will be invalidated if the pair turns up from the current levels and breaks above the downtrend line.