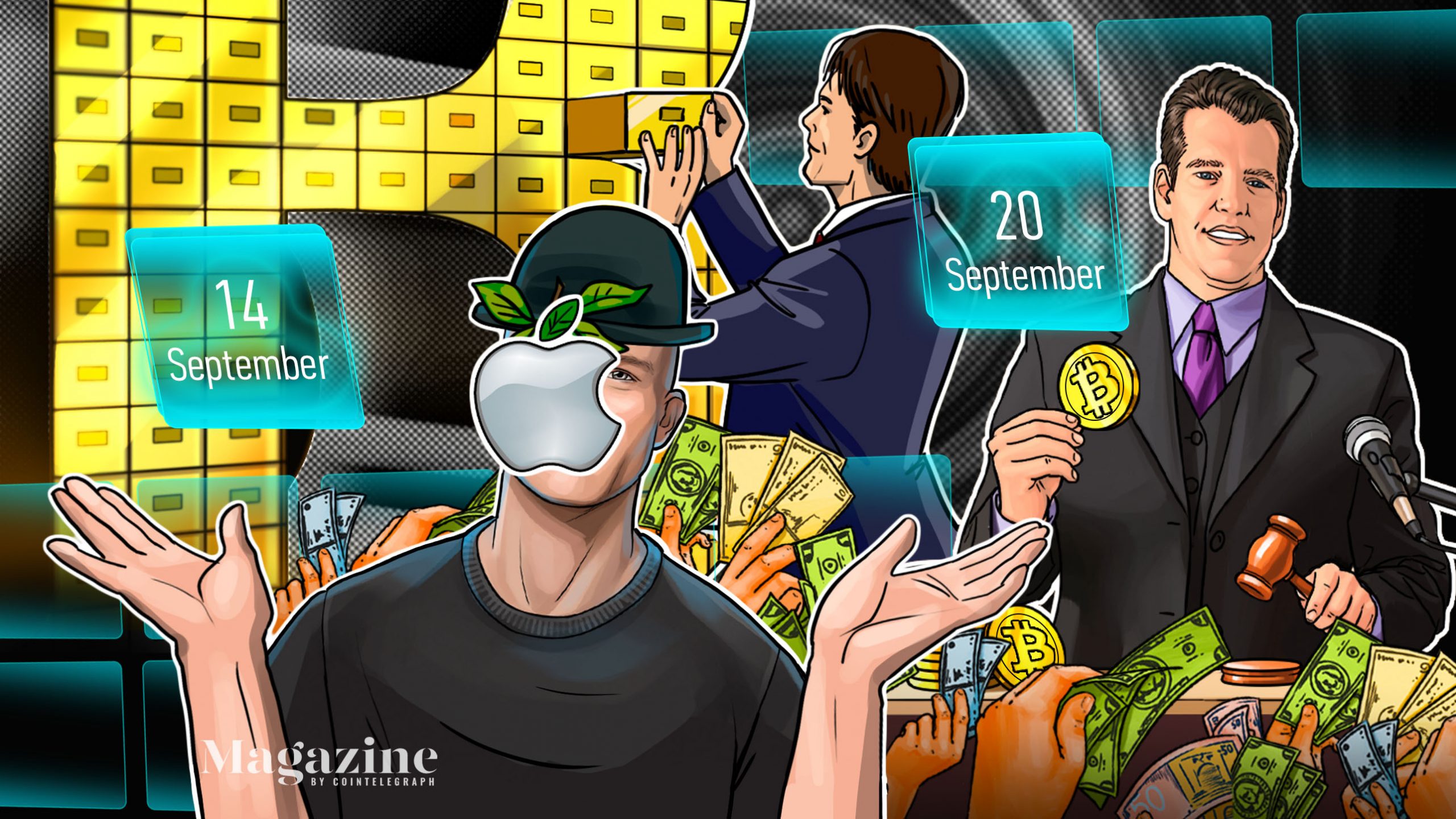 Coming every Sunday, Hodler’s Digest tracks every important crypto news story from the previous week. Essential reading for all Hodlers!

Uniswap stole the show this week when it announced it was launching UNI, its very own governance token. A total of 1 billion tokens will exist, and anyone who has ever used the platform can claim 400 of them.

Thousands came forward to accept their reward, and at one point, the airdrop was worth a cool $3,356. Not bad considering each token was initially priced at $3.

Within a single day, UNI was listed on more than a dozen exchanges and had driven $1.8 billion in trading volume. Binance added to the excitement by announcing support for the token just 90 minutes after it went live.

Many analysts were unsurprised when UNI rallied to highs of $8.60, and although the token has since had a correction, some traders believe the token could be worth many billions in the long term.

One of them, Crypto Medici, wrote on Twitter: “UNI going to be worth $3-5 billion (conservative) Still extremely undervalued. Token distribution was genius and many that sold will FOMO back in when we break $1 billion. This is before V3 comes out, and liquidity mining ramps up.”

The Uniswap frenzy helped daily transactions on the Ethereum blockchain reach a new all-time high of 1.4 million — exceeding the previous record of 1.35 million transactions in January 2018.

After the UNI token launched, transaction fees spiked to almost $1 million an hour. All of this means that the significant levels of congestion on the Ethereum network show no signs of abating, prompting renewed concerns about scalability.

Now, Coinbase Pro has had enough. The exchange has announced that it will no longer cover network fees on behalf of users. In a series of tweets, it explained:

“Historically, Coinbase Pro has absorbed these fees on behalf of our customers. However, as crypto has begun to gain broader adoption in applications like DeFi, payments and other projects, networks have gotten busier.”

In other Ethereum news this week, new research published by Cointelegraph Consulting has revealed that the total market cap of ERC-20 tokens has overtaken Ethereum’s.

A boring week for Bitcoin — But will momentum tip back in favor of bulls?

As Cointelegraph analyst Michaël van de Poppe notes, it’s been a relatively dull week when it comes to Bitcoin’s price.

The world’s biggest cryptocurrency has seen a slow upward trend after finding a footing above $10,000. Although the rally continued to $11,000 on Sept. 18, it was pushed back by some short-term resistance levels.

Van de Poppe says BTC is now facing a crucial resistance between $11,200 and $11,400, and if this area can be broken, a retest of higher levels will be back on the table. He doesn’t expect there to be a clear breakout out of this zone in one go and says sustaining support at $10,750 is crucial.

“Establishing new yearly price highs highly dependent on breaking the multi-year resistance level at $12K to continue the general uptrend for the rest of the year,” he wrote.

Also this week, the Bank of England became the latest central bank to discuss negative interest rates — effectively meaning that savers must pay to store cash. In response, Tyler Winklevoss said: “You couldn’t buy a better advertisement for Bitcoin.”

The European Union has officially got on-board with blockchain, announcing that it wants to make cross-border payments quicker and cheaper through the use of crypto assets like stablecoins by 2024.

The trading bloc is going to introduce fresh regulations that will promote this technology for international money transfers.

According to the European Commission, 80% of consumers in the EU use paper money at present, but it wants to see digital payments become more common, with immediate transaction times.

Documents seen by Reuters said: “By 2024, the EU should put in place a comprehensive framework enabling the uptake of distributed ledger technology (DLT) and crypto-assets in the financial sector. It should also address the risks associated with these technologies.”

Coinbase CEO Brian Armstrong has accused Apple of stifling innovation in crypto and sidelining DeFi to protect itself from competition.

The head of the exchange even claimed that other crypto firms are “reluctant to speak out on these topics for fear of retaliation.”

Claiming that attempts to talk to Apple directly have reached a dead end, Armstrong said that Coinbase is being stopped from adding features to its iOS apps that would allow users to earn money using crypto and access DeFi apps.

He wrote: “Why would Apple want to prevent people from earning money during a recession? They seem to not be ok with it, if it uses cryptocurrency. I’m not sure why.”

For more info on crypto prices, make sure to read Cointelegraph’s market analysis.

“Starting today, Coinbase Pro will pass along network fees directly to our customers… Historically, Coinbase Pro has absorbed these fees on behalf of our customers. However, as crypto has begun to gain broader adoption in applications like DeFi, payments and other projects, networks have gotten busier.”

“Prediction: $UNI will soon be the #3 crypto asset.”

“I don’t necessarily think that 2020 is going to be the year of some type of major retail bull run, largely due to the fact that the global economy still lingers over this industry, just like other financial markets.”

“Thanks Bank of England, you will help drive $BTC adoption.”

“2020 has witnessed a surge in the number of ATMs supporting digital coins.”

“As $BTC has crossed above $11,000 for the first time since September 3rd, the sentiment of #Bitcoin on #Twitter is surprisingly at an all-time low.”

“What happens when vaccine is proven? Gold silver Bitcoin will CRASH. Buying opportunity.”

“Since DeFi protocols are designed to be permissionless, anyone in any country is able to access them without any regulatory compliance. As a result, DeFi can easily become a haven for money launderers.”

“We added our 40th state today just a week shy of our one-year anniversary. 100% coverage is our goal.”

Prediction of the Week

In the aftermath of May’s halving, there was optimism that Bitcoin could be about to embark on a bull run — not to mention endless predictions that the cryptocurrency would return to all-time highs. But Joel Birch, the co-founder of the automated investing platform Stacked, now believes this isn’t likely.

Speaking to Cointelegraph, he said: “I don’t necessarily think that 2020 is going to be the year of some type of major retail bull run, largely due to the fact that the global economy still lingers over this industry, just like other financial markets.”

Despite that, he does believe that Bitcoin has an opportunity to continue heading upward between now and December.

Others remain as bullish as ever. PlanB, the creator of one of the best-known Bitcoin price models, has said it’s high time for BTC to begin its next significant price rise to $100,000, writing: “Time to go up.”

FUD of the Week

The drama over alleged fraud involving Bithumb’s senior executives continued this week, with the company’s chairman summoned for interrogation.

Police reportedly want to question Lee Jung-hoon, who is accused of multiple fraud and embezzlement offenses regarding the failed listing of the BXA token.

It is believed that investors lost up to $25 million as a result, with Lee allegedly embezzling these funds in overseas property purchases and offshore investments.

Also this week, Bithumb’s offices were raided for the third time this month. Police reportedly seized a number of shares in Bithumb Holdings belonging to Kim Byung-geon, the company’s Korea director.

Headline-grabbing pieces have warned that India’s parliament is preparing once again to try and ban crypto trading for good, but according to local experts, there might not be anything to worry about.

Siddharth Sogani, the founder of the Indian blockchain research company Crebaco, has described the reports as nothing short of “clickbait” — and he questioned the sources that Bloomberg had spoken to for a recent article.

Ashish Singhal, the CEO of the crypto exchange CoinSwitch, also told Cointelegraph that it is far too early for any draft bill to be presented to the country’s parliament.

He also pointed to the list of bills that is subject to discussion during the parliament’s Monsoon Session — and said a debate on banning crypto trading isn’t scheduled.

On Twitter, he wrote: “What happens when vaccine is proven? Gold silver Bitcoin will CRASH. Buying opportunity.”

Nonetheless, Kiyosaki believes that gold, silver and Bitcoin remain the best investments in the long term, and he argued the biggest threat facing the American economy isn’t the pandemic, but rather the massive levels of debt that have left the U.S. “bankrupt.”

Programmable money: How crypto tokens could change our entire experience of value transfer

Writing for Cointelegraph Magazine, Andrew Singer explores the rise of programmable money — as some experts say the coronavirus “is forcing a slow-moving tsunami” in this area.

Illicit crypto transactions are getting more attention from the government

As Selva Ozelli writes, the IRS has a strong interest in receiving information from informed whistleblowers about offshore crypto accounts and criminal crypto tax activity.

DeFi and healthcare: A trillion-dollar opportunity for the taking

You may not think that decentralized finance and healthcare would go well together — but according to Pradeep Goel, there’s huge market potential.