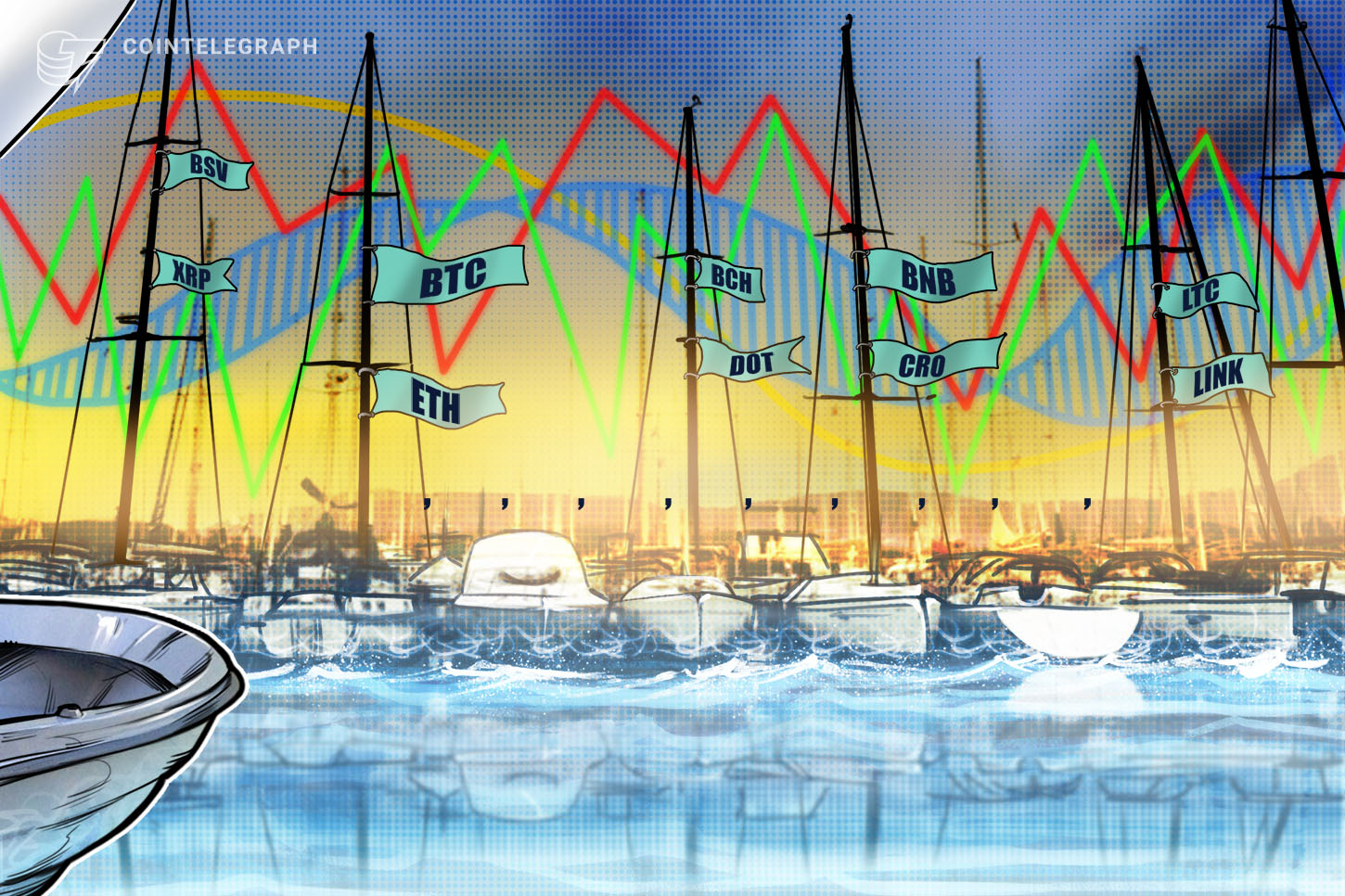 According to survey data from crypto asset insurance firm, Evertas, institutional investors believe that clearer regulations and better infrastructure in terms of trading, reporting, and custodial services will increase their participation in the crypto market.

About a quarter of the respondents expect that pension funds, sovereign wealth funds, insurance companies, and family offices will also become more involved with digital assets. The survey also found that 32% of the participants expect hedge funds to substantially increase their crypto holdings in the future.

The approval of the world’s first crypto asset exchange-traded fund on the Bermuda stock exchange is a positive step that is likely to entice several institutional investors to add exposure to cryptocurrencies. The ETF is a partnership between Nasdaq and Brazilian fund manager Hashdex and is expected to trade on the BSX by the end of 2020.

After the 2018 bear market, even a minor fall in Bitcoin (BTC) turns investor sentiment bearish as many instantly fear that a sharp fall is on the cards.

However, on-chain analytics provider Santiment has found that crypto assets tend to bounce sharply when uncertainty and fear are high.

With Bitcoin price still trapped below the $11K level, traders will want to know if  the current technical picture supports a rebound or further downside.

Let’s analyze the charts of the top 10 cryptocurrencies to find out.

Bitcoin formed an inside day candlestick pattern on Sep. 22, which shows indecision among the bulls and the bears. If the bulls can push the price back above $10,625, the recovery can extend to the 50-day simple moving average at $11,197.

If the bulls can push the price above the 50-day SMA and the downtrend line, the recovery is likely to pick up momentum and reach the recent highs of $12,460. A break above this resistance will increase the possibility that the uptrend resumes.

The 50-day SMA has started to slope down gradually, while the 200-day SMA is moving up slowly. This suggests a balance between supply and demand and points to a few days of range-bound action between the moving averages.

A breakout of either moving average will be a significant event that is likely to start a trending move.

After the sharp fall on Sep. 21, the bulls are attempting to arrest the decline and start a relief rally in Ether (ETH). However, the small inside day candlestick pattern on Sep. 22 shows a lack of urgency among the bulls.

If the ETH/USD pair does not break above the downtrend line within the next few days, the bears are likely to intensify their selling. The relative strength index in negative territory suggests that the advantage is with the bears.

If the pair turns down from the current levels or the downtrend line and breaks below the $308.392 support, the decline can extend to the 200-day SMA ($255).

Conversely, if the bulls can push the price above the downtrend line, it will be the first sign of strength. A breakout of the 50-day SMA ($389) will suggest that the correction has ended and a retest of the recent highs of $488.134 may be on the cards.

XRP closed (UTC time) below $0.235688 on Sep. 21 and since then, the bears have not allowed the bulls to reclaim the level. The bears will now attempt to sink the price below $0.2290 and resume the downtrend.

If they succeed, the XRP/USD pair could decline to the 200-day SMA ($0.214). The bulls will try to defend this level aggressively because if the price sustains below the 200-day SMA, it acts as a stiff resistance as seen between March and July of this year (marked via ellipses on the chart).

The first sign of strength will be a breakout and close (UTC time) above the downtrend line. This will increase the possibility of a move to the 50-day SMA ($0.269), which could act as a resistance. However, if the buyers can push the price above this resistance, bullish momentum is likely to pick up.

The bulls purchased the dip on Sep. 22 but could not maintain the buying pressure today. This has renewed the selling and the bears are now attempting to sink Bitcoin Cash (BCH) to the critical support at $200.

The price is trading below both moving averages that are sloping down and the RSI is in the negative zone, which suggests that the bears have the upper hand.

If the $200 support cracks, the BCH/USD pair might start a new downtrend that can result in a fall to $140.

This bearish view will be invalidated if the pair rebounds off the $200 level aggressively and rises above the 200-day SMA ($243).

Polkadot (DOT) is witnessing a stiff battle at the $4 support level with the bears attempting to break below it and the bulls trying to defend it.

The small range day on Sep. 22 and the doji candlestick pattern today shows indecision among the bulls and the bears about the next direction.

A breakout of the downtrend line will be the first sign that the correction might be over. Above this level, a relief rally to the $25.82–$27.1905 resistance zone is possible.

However, the bears are likely to defend the downtrend line aggressively. If they can again sink the BNB/USD pair below the 50-day SMA and the $22 support, the decline may extend to the 200-day SMA ($17.95).

The bulls are likely to buy the drop to the 200-day SMA and the strength of the rebound will suggest whether the downtrend is over or not.

Crypto.com Coin’s (CRO) pace of decline has slowed down near the critical support at $0.144743, which shows that the selling pressure is reducing. However, any recovery attempt is likely to face resistance at the downtrend line.

A weak relief rally from the current levels will suggest a lack of confidence among the buyers that the correction is over. That could attract selling by the aggressive bears who will then try to sink the price below $0.144743.

This bearish view will be invalidated if the pair turns up from the current levels and rises above the downtrend line.

Litecoin (LTC) plummeted below the 200-day SMA ($46) on Sep. 21. If the bulls do not push the price back above this moving average quickly, the possibility of a fall to the next support at $39 increases.

The three previous declines to $39 had proven to be a good buying opportunity, hence, the aggressive bulls might once again attempt to arrest the decline at this level. Any pullback is likely to face stiff resistance at the 200-day SMA.

If the LTC/USD pair turns down from the 200-day SMA, it will increase the likelihood of a break below $39. If that happens, the decline may extend to $32. Conversely, if the bulls can push the price back above the 200-day SMA, the pair can move up to $51.

The RSI is close to the oversold levels for the first time since March, which suggests that the decline has been overdone in the short-term. Therefore, as the price nears the critical support at $6.90, the bulls might buy the dip.

If the rebound off this level can rise above the downtrend line and the $8.908 resistance, it will be the first signal that the downtrend may be over.

However, this does not mean that a new uptrend will start immediately because, after such a sharp fall, the price usually forms a bottoming pattern before turning bullish.

The bulls purchased the dip below $146.20 on Sep. 22 but they could not push Bitcoin SV (BSV) above the downtrend line. This shows that the bears are selling on pullbacks to this resistance.

The downsloping moving averages and the failure of the RSI to rise above the 40 level suggests that the bears are in command.

If the BSV/USD pair turns down and breaks below the $146.20–$135 support zone, a new downtrend might start. The first support on the downside is $100 but if the bears sink the price below it, the decline can extend to $77.

Contrary to this assumption, if the bulls can push the price above the downtrend line, the pair could rise to the 200-day SMA ($185).

Total value locked in DeFi dropped by 66%, but multiple metrics reflect steady growth
How to bake your own DAO at home — With just 5 ingredients!
Bitcoin price sees $24K, Ethereum hits 2-month high as US inflation shrinks
How to earn interest from crypto saving accounts?
$29K Bitcoin is closer than you might expect, according to derivatives data