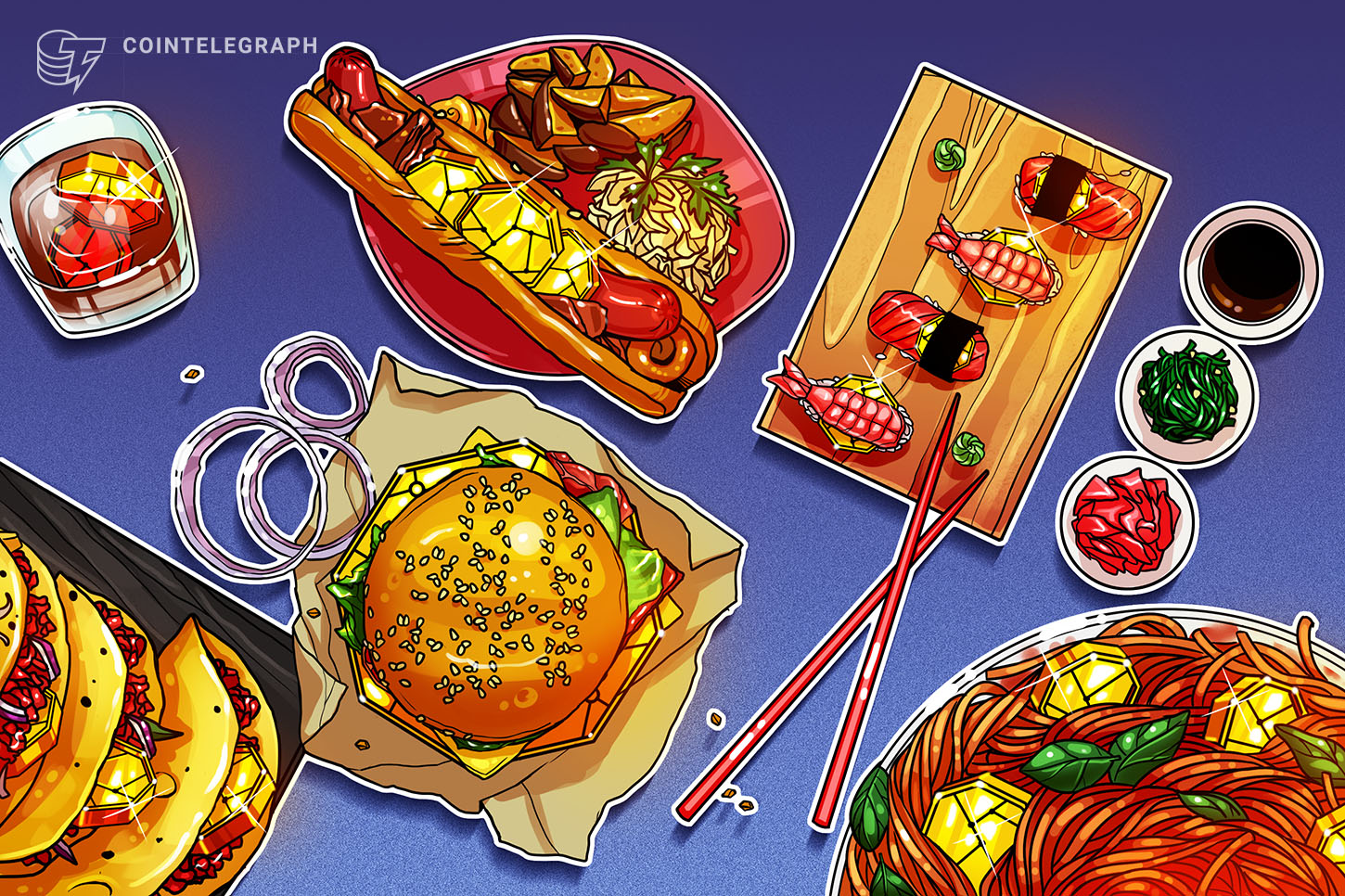 Lately, in the crypto scene, everything related to decentralized finance is being considered a gold mine. While DeFi has brought solid projects to the industry, there’s also a hot new craze, and it’s related to food. Everything from yams to burgers is now being converted to a coin and sold like a tasty meal at a food fair, and investors can’t seem to get enough of these food-themed coins.

However, there are growing concerns over the sustainability of these DeFi projects. At the beginning of the month, Hotdog, a food-themed project, shed 99% of its value within minutes. The occurrence stirred a debate on the hype around these new projects.

It’s safe to say that right now, somewhere, a new DeFi food-meme protocol is cooking in some stove across the globe. Let’s explore some of the most popular meme tokens that have hit the market. How legitimate do they look, and do they have solid financial and governance structures?

SushiSwap is the most recent DeFi liquidity-pool platform to emerge. With SushiSwap, anyone can participate, and investors can add their tokens into the liquidity pool to earn interest. The platform has become quite popular, as it attempts to be an improved, community-based version of the Uniswap decentralized exchange.

The token economics for its native token, SUSHI, are quite interesting, as 10% of its tokens were allocated to developers. Chef Nomi, the creator of SushiSwap, dumped all the tokens from the developer pool, worth around $13 million at the time, and later moved to distance themself from the project. Eventually, the funds were returned, and the project ended up at the hands of Chef Maki and the community.

Unlike traditional exchanges, SushiSwap is community-oriented, where users provide liquidity in return for rewards. With SushiSwap, the users are the market makers. It charges 0.3% on trades, and 0.25% is rewarded to liquidity providers while the remaining 0.05% is converted into SUSHI and rewarded to SUSHI tokenholders. It’s difficult to quantify the value of the protocol, which can only be estimated using the platform’s revenue-sharing model.

Uniswap brought about a revolution in DeFi technology, and this has inspired a lot of projects. While SushiSwap is all about rewarding liquidity providers on the platform, matters of governance are not fully in the hands of the users. The protocol is entirely undemocratic, with unchangeable low staking rewards. With that in mind, sushi is thought of as food for the elite, but here enters BURGER, which is considered “food for everyone.”

BurgerSwap’s protocol allows for democracy; therefore, parameters are directly determined by the people. Its users can vote to change the exchange parameters, and what’s more, they get rewards whenever they participate in voting.

BurgerSwap was the first such protocol to be developed on the recently launched Binance Smart Chain. The project was seen by some as a clone of SushiSwap, and its token is available for trading paired with Binance Coin (BNB). The launch of BurgerSwap saw the price of BNB shoot up over 33% in less than 48 hours, which caused a stir on the crypto scene, sparking speculation that Binance’s CEO, Changpeng Zhao, is supporting the high-”frying” project.

Following its tremendous performance, a Medium post by the platform gave credit to Binance Smart Chain for its support. According to the blog, the team behind BURGER was spread across the United States, the United Kingdom, China and Turkey.

Yam Finance is an experimental protocol with some of the most exciting innovations in programmable money and governance. At the core of Yam is an elastic supply of its native YAM token; it expands and contracts, depending on market conditions.

The price of the first version of YAM crashed to zero within minutes, due to a bug. After the project was called a scam by ShapeShift founder Eric Voorhees, Yam Finance posted a tweet claiming that the platform had a technical bug. An official blog post by Yam’s developers stated:

“At approximately 6PM UTC, on Wed August 12, we discovered a bug in the YAM rebasing contract that would mint far more YAM than intended to sell to the Uniswap YAM/yCRV pool, sending a large amount of excess YAM to the protocol reserve. Given YAM’s governance module, this bug would render it impossible to reach quorum, meaning no governance action would be possible and funds in the treasury would be locked.”

Since the crash, Yam has asked for patience as it carries out a four-week audit of the technical issues. Meanwhile, the development of Yam V3 is underway.

BakerySwap is the next form of Uniswap; it’s very similar, but it claims to be faster and cheaper. The BakerySwap protocol is democratic, and all liquidity providers will be rewarded with BAKE tokens, which will earn them a share of the platform’s trading fees and voting rights. BAKE tokens will be gradually released to liquidity pools, following their respective reward multiplier.

Early farmers will be greatly rewarded in terms of the initial BAKE per block release. An anonymous group of developers will receive a low share of rewards during the wholeBAKE farming period. The reward will be 1 BAKE for every 100 BAKE farmed. However, Binance’s CZ has been called out in a tweet by Jay Hao, the CEO of OKEx, for supporting “sketchy DeFi projects.”

1/Reminder to be careful when farming on Binance Smart Chain. As I said, it’s managed by only one team & is not decentralized. Built on #BSC, #BakerySwap caused huge losses for many retail investors <12h after mining began, which led to protests against BSC in China & elsewhere. https://t.co/BVvXeANN2s

Pizza is an EOS-based DeFi network that allows users to put their EOS tokens up as collateral to generate a stablecoin called USDE that is pegged to the U.S. dollar. The Pizza platform provides users with financial services that are already built in.

Some of these services include decentralized order-book trading through Pizza DEX, Chinese yuan fiat entry through Morecoin, instant asset swap through Pzaswap, asset liquidation functions, as well as an exclusive USDE investment program. Users generate PIZZA coins through mining. There is over 10 million PIZZA in supply and over 1 million in circulation.

Hotdog.Swap is another Uniswap copycat, launched in early September. The HOTDOG token it provided was highly illiquid, surging in price to over $5,000 but then crashing from $4,000 to $1 in just five minutes. The tokens are quite similar to SUSHI, where liquidity providers deposit Uniswap liquidity tokens to earn HOTDOG tokens.

All HOTDOG tokenholders are entitled to earn part of the protocol-accumulated fees. The idea is that liquidity providers are rewarded with 100% community-owned tokens. The original idea was started by Yam Finance, which opened up the gates for numerous copycats such as Hotdog.

Kimchi Finance is one of the new DeFi products popping up since the introduction of Uniswap. Named after a rather popular dish in Korea, the KIMCHI token’s popularity hit the roof when news emerged that it was able to raise $500 million in a matter of four hours, reaching a value of $6.

Kimchi is following in the footsteps of SushiSwap by using a yield farming protocol, which promises great riches for those willing to invest. However, following the recent Bithumb raid that sunk the whole crypto market, KIMCHI experienced a 67% drop from $6 to around $1.90.

Although not food-related, MEME is very much a quintessential meme token. The experimental project came to life as an airdrop to Telegram users. Jordan Lyall created a joke advertisement for “The Degenerator,” which received a lot of engagement on Twitter from the crypto community. Hours later, Lyall shared that someone had minted a token and listed it on CoinGecko under the ticker MEME. 28,000 tokens, which was the asset’s total supply, were distributed to interested parties on Telegram. Now the token has managed to garner a $3 million market capitalization.

Meme is trying to pivot to a niche as a nonfungible token-farming protocol. The project has become the first meme farming experiment. However, a recent tweet from crypto influencer Alex Saunders has revealed that a few people are attempting to create hype around the token.

The future of food-themed meme tokens

There’s no denying that the above tokens have taken the whole crypto space by storm, mainly because of the quick succession in which they were introduced. A deeper look at the trend reveals similarities to the initial coin offering mania of 2017. Money is being pumped into these projects, while information about the developers and founders of most of them remains a mystery or is surrounded by controversy. These projects seem to thrive without the checks and balances of the blockchain network.

Ryan Selkis, the founder and CEO of crypto data site Messari, recently tweeted: “The DeFi bubble will pop sooner than people expect. We’re nearing the apex of ponzi economics, rug pulls, and ‘yield’ hopping, and ETH fees are going to eat too heavily into non-whale profits.” But only time will tell if this sentiment is true and how long the hype will continue. Until then, crypto-entrepreneurs need to remain alert and look for any red flags that may wipe their investments in minutes.