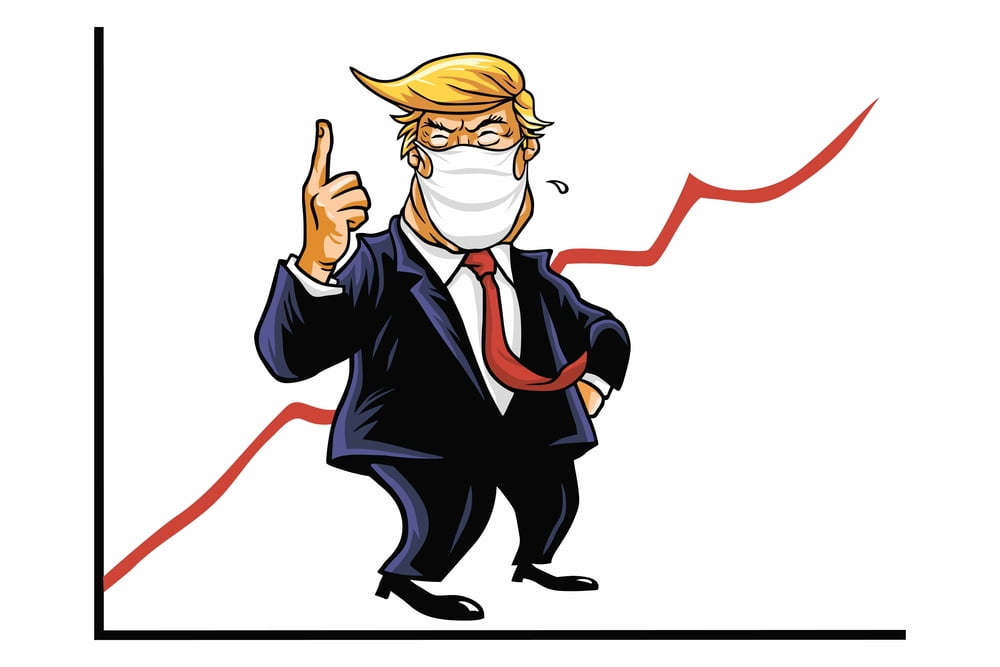 Bitcoin plunged alongside the US stock futures in early morning trading on Friday after Donald Trump revealed that he and his wife Melania tested positive for coronavirus.

Tonight, @FLOTUS and I tested positive for COVID-19. We will begin our quarantine and recovery process immediately. We will get through this TOGETHER!

Right after Mr. Trump sent the tweet, the White House released an official statement signed by the president’s physician, Sean Conely, that confirmed that both Mr. and Mrs. Trump had coronavirus.

“The President and First Lady are both well at this time, and they plan to remain home at the White House during their convalescence,” the document read.

Futures tied to the Dow Jones Industrial Average fell 1.37 percent ahead of the London trading session on Friday. The S&P 500 and the Nasdaq Composite, too, plunged by 1.36 percent and 1.55 percent in the pre-trading session, respectively.

At the same time, the yield on the benchmark US 10-year Treasury note fell to 0.661 percent, signaling a short-term demand for bonds. Futures tied to Gold futures also surged higher by 0.83 percent as investors sought safety in haven assets.

Nevertheless, traders ignore Bitcoin, a safe-haven alternative that delivered the best year-to-date gains among traditional assets amid the coronavirus pandemic.

The cryptocurrency plunged by as much as 2.5 percent on Friday to hit an intraday low near $10,363. It failed to garner investors’ interest as American authorities filed money-laundering charges against the owners of BitMEX, one of the largest crypto derivatives exchange.

Soon after the news made to the wire, Bitcoin gave up its levels above $10,800 on panic-selling sentiment. BitMEX was handling more than $1.5 billion of trades.

“CFTC gunning for the owners of Bitmex! #bitcoin down as a result,” said Lark Davis, a crypto YouTuber. “I’m surprised to learn that Bitmex is still relevant in 2020. One factor to consider this story though is that Bitmex vaults have around 193,000 BTC!”

Analysts, meanwhile, remained bullish on Bitcoin for its long-term outlook. Travis Kling, the head of the Ikigai Fund, said that the ruling against BitMEX is a step in the right direction for the cryptocurrency sector. He noted that receiving an approval for a Bitcoin-focused exchange-traded fund is now within reach.

Meanwhile, some traders expected Bitcoin to continue its rally. A pseudonymous analyst stated:

“For HODLers, this is just another opportunity to buy the dip. If you’re an institutional investor, this is an invitation to enter.”